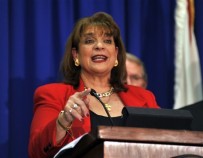 About a half hour later Zimmerman surrendered himself to the state and was taken into custody.

Corey stated that the decision to file charges was not made lightly. She also added that the petitions and media pressure did not factor in the decision.

The big problem at this point will be in finding an unbiased jury as most Americans have been following the case in the media and have made up their minds one way or the other.

Zimmerman’s new attorney, Mark O'Mara, stated that his client is somewhat dismayed about his arrest but will plead, “not guilty.”

I agree with Al Sharpton that it's not time to celebrate anything. Although Zimmerman is in custody and has been charged with 2nd degree murder, a young man is still dead.  Long ago an arrest should've been made and if we celebrate the authorities doing their tax-paid jobs.... it will eventually be seen as an unusual event.

The charges will officially be read in a court of law on Thursday, April 12 and Zimmerman will have his chance to plead.

Trayvon’s mother showed her long awaited relief over Zimmerman’s arrest. "We wanted nothing more, nothing less. We just wanted an arrest," said Sybrina Fulton. "I say thank you. … Thank you, Jesus."

The goal in this case should be for any American (any religion, nationality, age, gender, body type or anything else) to be able to freely walk down any American street without being harassed, questioned or murdered. If Trayvon has to be the poster-child for that FREEDOM - then his life will not be in-vain.

Did Zimmerman’s Father Get Him Out Of Trouble

Rallies From Coast To Coast