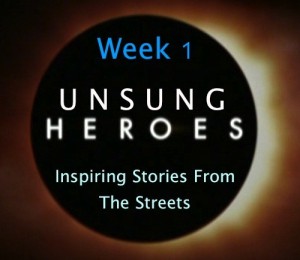 Eric Sheptock is a longtime homeless advocate utilizing social media to make a difference and is quite popular on Facebook.

Eric often targets the root causes of homelessness and spends most of his time penetrating the political and business districts of DC in an attempt to educate both them and the public.

Over the years he has made substantial differences and has managed to gain the attention and respect of the media, some big-name politicians and the citizens of DC.

He knows the issues first hand because he-himself is homeless.

You can find Eric here -  (Click)

In New York City a homeless man named Hugo Tale-Yax intervened as a man was attacking a woman with a knife.

The woman got away safely.

Unfortunately, Hugo was stabbed and laid facedown and bleeding on the street for an hour as more the 20 people walked by him without stopping to help.

When firefighters arrived on the scene Hugo was pronounced dead.

Public libraries are often a haven for the homeless so that’s where Emily Pogue, of Arizona, decided to make her rounds.

Emily is a registered nurse who cannot offer medication but she can often help with diagnosing a problem and steer the patient to low-cost or no-cost medical professionals.

She also gives them each a bag of personal hygiene items, daily vitamins, healthy food that won’t spoil and other items to keep them from getting sick or progressing their current illness.

She says that the items and advice are not the most important thing she offers… It’s the fact that they know they are cared about, valued and worthy.

In April she helped 700 homeless patients.

The fastest growing homeless population today is: U.S. Veterans. Today they account for 23% of the homeless.

VEO (Veterans Empowerment Organization) of Georgia understands the complexities and often-fragile mental state of a U.S. Veteran returning from combat.

To be sent from a violent warzone back to a normal civilian society is too much to ask of anyone.

Combat stress often leads to self-medication (drugs, alcohol and other destructive temporary solutions). In an attempt to function, many Veterans isolate themselves and break off communication with family and friends. Ultimately many wind up homeless.

VEO accepts homeless Veterans from the streets of Atlanta and offers emergency housing until permanent housing can be arranged. The only qualification is that the Veteran has his/her DD214 (Military discharge papers) and, if they don’t have a copy, VEO helps them get it.

Depending on the response and traffic, we’re considering making this a weekly feature column. Please share this with your friends and family.﻿