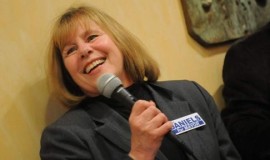 As-if Troy, Michigan didn’t have enough problems; they’re now confronted with the issue that their mayor is an over-employed comedian.

On Tuesday December 6, at Troy City Hall, Mayor Janice Daniels met face to face with 30 protestors over an anti-gay slur she chose to post on Facebook.

The slur – “I think I am going to throw away my I Love New York carrying bag now that queers can get married there.”

We often say stupid things when we’re trying to be funny… but, there’s a side to that coin you may want to take a look at. Most humor reflects the truth about how someone feels and, unfortunately – the more painful… often the more humorous. That may sound unreasonable but take a closer look and you’ll see it.

Mayor Daniels spoke to the protestors and stated, “There are times when errors are made and, next time it may not be me – it may be you. Yes, I said it.  Yes, I accept full responsibility. Yes, I regret it. Yes, I am sorry.“

As with anyone, she wanted her apology accepted and she wanted to be forgiven but the apology was not met with forgiveness and many people left doubting her sincerity.

The confrontation with these 30 protesters is nothing compared to the borage of attacks she’s dealing with on social media from across the nation. As the issue goes "viral" Mrs. Daniels is becoming the new poster-child for American hypocrisy.

On hearing the mayor’s apology, my first reaction was to side with Daniels and to wish people would lighten up and at-least attempt to forgive her.  Then I stepped back from the whole issue.

Her whiney voice attempting to turn herself into “the poor victim under attack…” kept ringing in my ear. To make matters worse the mayor stated that the word, “queer” is just a word.

I guess the word “queer” is kind of like the word “Pollock” or maybe it’s more like the word ”nigger.” Either way – they’re not just words. They reflect how a person truly feels and thinks about a large percentage of our population. For Mrs. Daniels to blow off her statement and say, “it’s just a word” makes me truly question her intelligence level and her leadership abilities. As for her apology – it’s laughable.

For Daniels to say something like this in some hallway to one of her co-workers is one thing but to say it on Facebook is downright moronic.

Lesson 1 for any person in business or political power is to be very careful with what you say publically, especially on social media. But the real lesson here is for the voters of Troy. Ultimately you, as a community, are responsible. You voted for this person to represent you.

Sorry Mrs. Daniels. You failed. A person in your position cannot go around cracking bad jokes, hurting people and being irresponsible. Your apology isn’t going to make it go away. Is there any other group of Americans you hate? Blacks? Overweight people? Teen hating seems to be fashionable. Poor people? You don’t have to post it on Facebook - you can always show your ass on Twitter.

Be careful whom you vote for Troy.