The Truth about Art Education 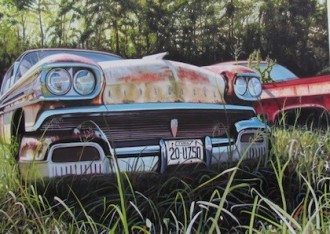 I don't believe that art is something you learn like math or your ABCs. I believe it's something you're born with. It's "who you are." When an artist's dream of spending their life creating their chosen art is destroyed it is not the dream that's destroyed, it is the very human being.

As I went about the research for this article, I found a lot of good news and great support for the arts in public schools. However, I didn't find a whole lot of truth. If everyone is so supportive of the arts and our schools think the arts program is such a wonderful thing, why is the average salary for the American Artist only $4,887.00?

Are schools only concerned with their image? What happened? Why are they not concerned about what happens to a student when they graduate or drop out? Do they tell a talented young artist that the local community doesn't support them and only the schools do? Do they tell them that unless they're parents are wealthy and they know a lot of people who own art galleries, they can expect below poverty wages and the American system will abandon them?

Americans For The Arts, www.artsusa.org, website states that children involved in the arts are:

• 4 times more likely to be recognized for academic achievement

• 3 times more likely to win an award for school attendance

They don't provide information on when this study was conducted or by whom.

I think it's wonderful that someone is supporting the arts in public schools but I think they need to go about it in a different way. Then again, maybe they just studied the kids who were taught to never color outside the lines and never use blue in the same painting that has red in it.

The art programs in school should recognize the natural born talent of the artist, supporting the talent, and helping to clear a path in the community for the artists whether or not they're good at science and math.

Human beings communicate in whatever way that suits them. Some use speech, some use the results of their business, some write, some teach, and some paint pictures of the art teacher sitting on the principal's lap.

That brilliant youngster is apt to fail all academic classes and be left behind by a society that fails over and over to recognize the child's talent. GM, Mac and Google miss their opportunity to hire the best in the business and the kid winds up pounding a set of drums for a local garage band until he's forty years old.

Again, which artists are they speaking of? I agree with the "risk-taking part," but I wonder if they are using the continued or increased support of arts in the public school system to further promote robotic little solders.

Where and when is it going to be said that, like a doctor, lawyer, teacher, scientist, or housewife, there is a place in the world for the artist and it's just as important as everyone else's place? When is it going to be taught that the American artist's value is deteriorating, not because of their lack of value but because of our inability to recognize their value?

When and why don't they say that an increased math score translates to more adaptation and ability in the arts? It would be ludicrous to say that because it isn't true. The mathematician has their part in society and the artist's value in society should be recognized and equality rewarded, let's face it folks, it isn't.

Edutopia stated, "Arts education has been slipping for more than three decades, the result of tight budgets, an ever-growing list of state mandates that have crammed the classroom curriculum, and a public sense that the arts are lovely but not essential."

If the average salary for the American artist was $120,000, a year this wouldn't happen. The schools would be all over it. Art schools would spring up throughout our communities. Art teachers would be geniuses and not a flunky gym teacher or a substitute waiting for a full time English gig. There would be all sorts of community pressure on the schools to support the creative students and those ugly prison-like red bricks would suddenly turn to every shade of the rainbow.

Funding is cut because the artists are not being seen as valuable pieces to the American puzzle. The value of the human being is determined by their income. This problem cannot be addressed in the school system. It has to be addressed in individual communities. When the value comes, up funding will be deemed necessary.

"In most cases, nothing will be done until the sickness in community becomes unbearable and even then the true problem may not be recognized." -Deepti Pareenja

Parents catch the bind, and I understand and feel for their dilemma. "My kid is an incredible artist, but how do I support that when I know their future will be limited?" "My kid has 20 times the talent that Brittany Spears ever dreamed of having, so how do I let my child have their dream when I know they'll suffer and probably fail trying to reach their goals?"

I only wish that parents could see how simple the answer to their dilemma is: Support your child's creative ability. At the same time get out in your community. Gather other parents like yourself (there are many), talk to your politicians, enlighten people, talk to your business leaders, develop organizations, and increase public awareness. In short, blaze the path for your child's future. Demand that your leaders (you are just as much a part of the community as they are) recognize and financially support ALL of the arts in the community. The community will applaud you and support you. It's a promise. The reason that I can promise this is because I know that art is not something we can do without. The true health of a community can be seen in the strength of ALL the artists within the community. In short, it isn't something we can take or leave. Whether they know it or not, it's something we need. Prove it to them.