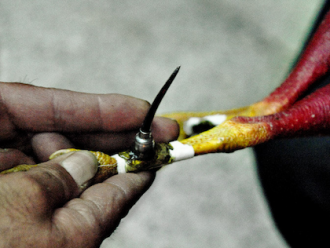 Cock fighting was banned in Tennessee in 1881 on the grounds of being a cruel blood sport. Banning it never even slowed it down. If anything it advertised it, and today it's bigger than it ever was.

In the states bordering Tennessee, cock fighting is a big sport. In Tennessee it's gigantic, and there's big money involved in the "so called" sport. The reason Tennessee is the capital of cock fighting is because, unlike the other states, it isn't treated as a serious crime. It isn't a felony. It's a misdemeanor that comes with a $50.00 fine. This fact draws audiences and participants from all over the country and sometimes from all over the world.

For the past 4 years Tennessee lawmakers have been trying to increase the penalties and make cockfighting a felony crime. For the past four years the attempts have been blocked before they ever made it to the House.

Jon Lundberg (R-Bristol) and Bill Ketron (R-Murfreesboro) have been working tirelessly to sponsor a new bill.

This time Lundberg and Ketron added an amendment. They still attempted to make it a felony but they decreased the fine of the original bill to $2,500 and it passed unanimously by the Senate judiciary panel. All looked good until it was voted down in a House agriculture subcommittee on April 13.

Who would ever be opposed to and vote down making cock fighting a felony crime? Frank Niceley is your answer. Niceley is a Republican sub-committee member representing Knoxville TN. He states, "Cock fighting should not be a felony because it's a cultural tradition." He also adds justification about overcrowded jails.

In the wild or on a farm roosters occasionally will have a brief altercation over territory, but the fight is always very brief and never involves serious injury.

Controlled cock fighting is a very bloody and violent pastime. Cock fighters attach razor blades or very sharp spikes called a "lance" to the legs of the birds. The spikes or razors are meant to hurt or kill the opponent rooster (much like a sword fight). The birds usually fight until one drops to their painful death in a pool of blood.

Bets are placed on which bird will win, and we are not talking about nickels and dimes. Cock fighting is big business in Tennessee. You can buy a specialty rooster raised by breeders who prepare the bird for the one purpose of cock fighting. They are fed specialty food and often raised in very abusive circumstances to make them more aggressive.

On top of the animal cruelty issue people have died at cock fights when one of the roosters escaped the pen and started going after the audience.

To the Chattanooga Free Press Niceley stated, "They pay their taxes. They're not bothering anybody. I don't know what the big deal is." He also noted that it brings in tourist dollars from other states. "They buy food, they stay in hotels, they buy gas," he said.

Frank Niceley (Republican sub-committee member) can be contacted at (615) 741-4419 rep.frank.niceley@capitol.tn.gov.