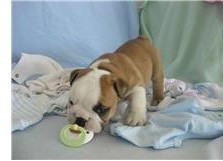 Two weeks ago a man contacted the Knoxville Daily Sun wanting to place an advertisement about 2 English bulldog puppies he was giving away.

Being somewhat of a dog person I became suspicious right away. The average price for a purebred English bulldog puppy is between $1,500 and $2,200. If the man was truly attempting to find a home for these dogs and was giving them away they would have no problem doing so.

I did a search for the email address and quickly found the same person was placing ads all over the Internet attempting to give away the same dogs.

As if I were anyone who came across an ad, I contacted him via email on March 16.

Oddly enough I didn't get an immediate response, but I soon learned that that was part of the scam.

On March 21 (6 days later) he responded to my email with 4 pictures of adorable bulldog puppies.

The email was from a man going by the name of Rev. Andrew Miller. It was a lengthy, one paragraph, poorly written letter explaining why there was a delay getting back to me. He also explained that he had to go out of the country on missionary work, was now in Africa, had to take the dogs with him, the dogs were in danger, how much he and his wife loved the dogs and more information on exactly how he runs his scam.

Naturally, the pictures and the names of the dogs are to get you to fall in love with them. The issue that they could die is to capture your heart and get you in his full control.

The keywords and red-light quotes in this email are: "my darling sweetheart and super spoiled," "What really happened," "i got a missionary call," "priceless to us," "very good care of our babies," "only want to save their life's and care," "you and I," "don't want Dany and Tracy to die," and "Rev" .

Most of these keywords are to get you to believe that the person you're dealing with is a good, honest person. This is particularly highlighted in the issues of him supposedly being a reverend and doing missionary work in Africa.

In all 6 emails were exchanged before finding out exactly what he wanted me to do and how much it was going to cost to get the dogs shipped to me. The price was $1,400 but he was willing to pay half (what a nice guy) so my cost would be $700.

As I said in the beginning of the article the average price for this breed of dog is $1,500 - $2,200 so, on top of everything the person has learned, they feel like $700 is a good deal and the person is generous enough to use their own money to help you and the dogs.

The scam ends up with its victims sending a wire transfer of $700 to the man.