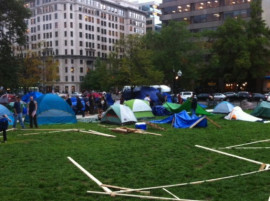 The Occupy Wall Street movement began last year in New York and quickly spread throughout the country. The mission of the movement has been somewhat fragile and undefined but is basically fueled by anger over the financial control by the American corporate and political elite.

Throughout last night and into this morning police have been preparing to enforce new regulations on the protestors in Washington DC.

Last Tuesday, a federal judge rejected a request to pardon a ban on camping at McPherson Park and stated that living in a public park as a means of protest was not protected by the First Amendment.

Early this morning Police arrived, in riot gear, at McPherson Square and Freedom Plaza in downtown Washington, but quickly made it known that they were not there to evict the protestors.

Police stated this morning they were only there to enforce camping regulations, which equate to removing sleeping bags and household items. As of 1:12pm, there's been four arrests made and tension does seem to be rising, but there’s been no violence reported.