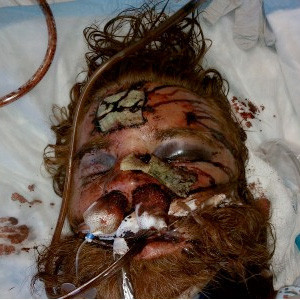 In Fullerton, CA six police officers were placed on leave after videotape and many eyewitness reports claim the officers relentlessly beat a homeless man to death. All who witnessed the tapes and listened to the statements agree: it was a horrible matter of overkill.

Kelly Thomas was a 37 year old male who began showing signs of schizophrenia in his 20s. Before that he was your normal young man but when the mental disorder progressed he rapidly went downhill. Since his 20s he has had bouts with homelessness.

On July 5, 2011 Thomas was in the wrong place at the wrong time. Police had responded to calls of a man burglarizing cars in the area. At that point, they called out for Thomas to stay put but he left. When the police caught up to him they began beating and tasing him. At one point you can hear Thomas begging for mercy, saying he was sorry and crying out for his father. It didn't stop the beatings. Eventually he was hogtied, kicked in the head, beaten and tased even more.

Following the altercation Thomas was taken to the hospital where he died five days later.

Sometimes the police are on an unspoken line where they have to use extreme force to protect themselves and the public. In this case, all witnessed agreed that Thomas was not resisting and posed no threat to anyone. While the police continued to beat and tase him the public began demanding that the police stop, but they didn't.

On Tuesday, his father, Ron Thomas, appeared at the Fullerton City Council meeting and made an emotional plea which demanded answers. More than 200 community members were on hand while most of the rest of the community watched on local TV.

Normally, the Knoxville Daily Sun wouldn't report on local news from another state but this one is now sweeping the country via the Internet and has grown to national news. Now, most of the US public is also demanding answers and, so far, we haven't received any.

The unpleasant videos have surfaced on YouTube and in the California media. If you search for these videos you should be forewarned: they are more like an extreme torture session than the police doing their jobs.