Over 675 Knoxville Homeless and Needy enjoy a delightful Christmas Brunch 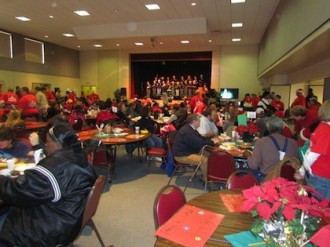 At 8 o'clock this morning a bustle of activity was evident as volunteers began preparing for the annual Christmas Brunch at First Baptist Church. By 9 o'clock homeless and low-income people were already making their way through the open doors. Each were greeted with warm smiles and escorted to the beautifully decorated sanctuary with poinsettias at the altar and in the baptistery and brightly lit Christmas trees in the balcony.

A special section had been staged of a backdrop of poinsettias where guests could have their pictures made.

This was the setting for approximately 675-700 guests arriving at the annual Christmas Brunch for the homeless and needy people of Knoxville.

Volunteer escorts were on hand to show guests the way to the brunch after they had their picture made. They were taken through the church's hallways and down elevators to Trentham Hall for a well-organized breakfast of homemade biscuits, bacon, sausage, fruit, sausage gravy, and various beverages. Herman Weaver, the Church Host, and volunteers did an excellent job of preparing and serving the food. These volunteers had arrived at the church in the wee hours of the morning to begin their kitchen duties.

Beautifully decorated dining hall tables had a poinsettia as the centerpiece Children's groups at the church had made colorful placements of red and green for the tables. Youth choirs performed upbeat Christmas music as guests enjoyed their bountiful breakfast.

A special section had been set up for the children attending the event. They could sit at their own little tables, glue things together, and make their own crafts. I had spent a lot of time taking pictures and listening to choirs singing while trying to get a grasp on everything that was going on, but my favorite part of the day's events was watching and hanging out with the children. After awhile I forgot all about taking pictures, just sat down with them and started gluing my own stuff together. We had a blast, and the non-stop smiles on both young and old kept coming all morning.

Stockings filled with various items had been prepared for the children, and handmade toboggans were given to children as well. Some of the adult guests were given a laundry basket with detergent and others were given stockings containing personal hygiene items.

The church's Community Minister and event coordinator, Carol McIntyre, said "I think it's been a success. People are getting out of the cold, they're getting fed, and everyone seems to be having a great time. They're all happy today. The coordination has been a little stressful, but that's to be expected."

After guests enjoyed their breakfast, they received their gifts and the photographs that were made as they arrived at the event.

First Baptist Church pastor, Bill Shiell said, "It's really not about us. It's about the people and making them feel comfortable and not herded or rushed through. Right now we're up to about 450 people. By the end of the day we're expecting roughly 680. It's about the community and making everyone feel accepted and welcomed. I will add that I'm awfully proud of our 250 volunteers. They've been wonderful and this couldn't be accomplished without them."

The Christmas Brunch was a wonderful way for members of the community to show their compassion and love for our city's homeless and needy individuals. This special event has created the most heartwarming Christmas of my life.