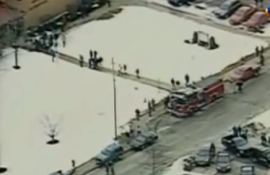 The violence originated in the school’s cafeteria where the students were eating breakfast and getting ready to start their day.

Chardon High School (30 miles from Cleveland) is not know for violence and took everyone off guard. The shootings created a lot of panic and everyone just started running toward the doors. 1,100 students were in the school at the time while parents rushed to the school to get their kids. The students who weren't picked up were evacuated to a nearby Elementary School.

The suspect was apprehended ½ mile from the school and is in custody.

Five students were taken to the hospital: Three have been reported in critical condition and one has been reported dead. Information is still coming in and we’ll keep you updated.

The suspect is a white male student. His name is not being released although one witness described him as “a loner-type into the Goth scene” (Goth = A subculture that mostly follows post-punk alternative music and dark, often black, fashion statements).

It is confirmed that 1 person is dead. Three other victims are reported in critical condition but that information is not officially confirmed. There’s no official status on the one-other victim.

The suspect gave himself up a half-mile from the school. Weapons seized were a 22-caliber pistol and a knife.

The boy who died in yesterday’s Ohio School shooting was named Daniel Parmertor. He was 16 years old.

Russell King is the name of one of the students wounded in yesterday’s school shooting. This morning Russell was declared brain-dead.

Demetrius Hewlin is the name of another student wounded. His condition is unknown. Demetrius, another young man and a young lady remain at MetroHealth Medical Center are in unknown but serious condition.

The Police will not release name of the shooter, but students and family have told the media his name is T.J. Lane. Lane attended Lake Academy in Willoughby, which serves “at-risk students.” Apparently from a broken family, he lived with his grandmother and sister. He was doubling up his classes with the intent to graduate early and has only been described as “different.”

Although school violence and shootings is not a new story in America it had been getting a little better and this is the most serious incident in 11 months.

It’s now been confirmed that Demetrius Hewlin has passed away.

No details are being released.

We’ll be staying with the story as it develops and we’ll be updating you throughout the day. 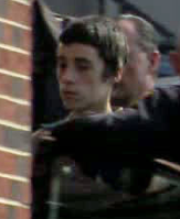 The seventeen year old suspect, TJ Lane, told the officer who arrested him that he wasn’t targeting anyone in particular and chose his victims completely randomly.

A hearing was conducted today to determine if he will be tried as an adult or a juvenile.

Before the hearing, Judge Timothy J. Grendell ordered that no facial pictures of the TJ, the victims or their families be published by the media. He also ordered that the lawyers involved with the case could not talk to the media. Both orders are expected to be appealed.

The media has motioned for release of any juvenile records on TJ and a new hearing is set for tomorrow on that issue.

Although it has been moved to a further date, the likely scenario is that the case will be moved from juvenile to criminal court, where he will be tried as an adult.

No charges have been placed but the judge did order that, due to the seriousness of the crimes, TJ will be held in juvenile detention without bail. Official charges are expected to be placed March 1. From there, the first trial will take place March 6.

Newest update (just moments ago) One of the victims in the shooting has been released from the hospital and appears to be OK but their status is not official.

Rumor mill – (The following information has not been confirmed) It is said that TJ repeated stated the words, “I am sorry” as he was leaving the courtroom.

It’s also been said that he stole the gun from one of his uncles.