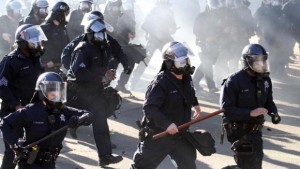 Police were on the scene of the Occupy Oakland Protest because they were receiving threats of the protestors taking over the Henry Kaiser Convention Centre.

The protesters assembled in downtown Oakland and, as they crowded the streets, they disrupted traffic and marched toward the Convention Center.

A small number of the protestors threw rocks and flares at police. As the attempt was made to disperse the crowd, things turned more violent.

The crowd grew from a few hundred to over 1,000 in a matter of minutes and some began destroying city property and construction equipment near the scene.

Police resorted to using tear gas and smoke grenades to break up the crowd and would later be heavily criticized by the mayor of Oakland (Jean Quan) who said she was not briefed on the plans to use such force.

Nineteen people were arrested and three officers were injured.