Live Updates and details will be included as the story unfolds.

Updates appear at the top of the page. For the original story start at the bottom and continue upward through the updates. We are following the story via reporters, photographers and satellites throughout LA.

LA businesses, private donors and community groups have accumulated and posted a 1 million dollar bounty, the largest in LA history, for the capture and conviction of LA’s most wanted criminal – Chrisopher Dorner.

LA Police Chief Charlie Beck has declared Dorner a "trained assassin" and has made the public statement and promise that if Dorner turns himself in he will not be harmed and no one else has to die. /// He also stated that if Dorner did not and he took the life of another Los Angeles police officer or their family member, then he'd have to suffer the consequences.

The search is still centered around Big Bear Lake where Dorner’s truck was found with a broken axle and burning on the property of a known associate. The manhunt through Big Bear has been difficult as authorities are dealing with single-digit temperatures and heavy snow.

Police have not ruled out the possibility that he has crossed state lines into Nevada but it’s more likely that he continued south and has crossed the Mexican Border as some of his personal belongings were found at the San Ysidro Point of Entry at the border.

Dorner was also spotted attempting to steal a boat at a San Diego Navy Base and he himself was a Navy Reserve Officer and would be familiar with the base.

At 270 pounds Dorner is not hard to spot yet a number of false sightings have poured in throughout the Midwest and far west regions of the country. One of the sightings resulted in the tragic shooting of two women (Margie Carranza, 47, and her mother, 71-year-old Emma Hernandez), in a pick up truck matching the description of Dorner’s vehicle.

Police are looking into Dorner’s employment record with the department and investigating his termination along with other allegations he made in an 11 page manifesto declaring war on the on the LAPD.

Dorner was fired in 2009 for allegedly lying about a case two years prior when he filed a complaint about a fellow officer. Since that time he has held a major vendetta against the department, which eventually hit a breaking point in early 2013.

LAPD Chief Charlie Beck made it clear that he wasn’t catering to the murderer’s wishes but wanted to show the public that the department is fair and transparent.

California Police were targeting their hunt on the mountains: namely - Big Bear in San Bernardino as Dorner is known to be a survivalist and has contacts in the area. The intense manhunt has left the residents of Big Bear in a fear and "lock-down status" and there is ample reason to believe he’s in the area.

At the same time: leads and sightings of Dormer have come in from Last Vegas to the Mexican border but police remain convinced he’s in the Big Bear area.

The temperature in the mountains is in the teens and is being scanned via foot, helicopter and plane.

Dorner has declared war on the LAPD. At this point, there are three known officer-related deaths and two known injuries.

Dorner is heavily armed and suspected of five shootings totaling 3 killing and two injured. Two were in Riverside CA. Both victims were police sitting in a patrol car. An hour before the Riverside shootings an officer was shot at in Corona.

Dorner is also suspected of a double killing a week prior in Irvine, CA. The victims were the daughter of a retired police officer and her fiancée.

Throughout the weeks prior Dorner left many troubling social media messages. One was a 6,000 word article containing threats to specific officers on the LAPD staff. An excerpt from the article states: “There will be an element of surprise where you work, live, eat and sleep…. I have the strength and benefits of being unpredictable, unconventional, and unforgiving.” 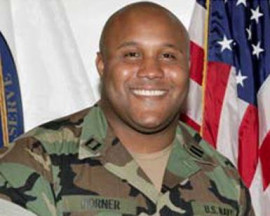 Man-Hunt on for LA Cop-killer

There's a killer on the loose in LA. He does not yet have "serial" status but he's close. His target is: cops and is an ex-cop himself who was fired from the department.

The country's largest, most intense manhunt is underway.

This story begins in 1991 - with the Rodney King beatings, then the LA riots.

Within the Police Department racism hit it's peak and the current LA killer (a black male named Christopher Jordan Dorner) was on the force trying to expose the overwhelming racism within the department. Then he attempted to expose a cover-up in the court system during the hearings.

Years later he attempted to expose an officer kicking a mentally ill patient in the head and claims this is why he was fired from the department.

Dorner states that there’s still pockets of extreme racism on the force and they are his target.

Here is a post on the killer's FB page that was left yesterday... as written..

The subject of the letter is "LAST RESORT" for those of you that are aware of the definition. This is something that we {African Americans} experience in our every day lives for over 400 years. Imagine if every African American that experienced this behavior in the work place and immediately faught back using violance.(WOW) Now that we have began to fight back by any means necessary as a LAST RESORT. If you're not African American, you probably don't understant that if we can't get you, we will get the closest to your heart by not hesitating to take down your family and loved ones and this does include kids. Example: if we want to harm one of five people in the house and we can't get to that one person.........LAST RESORT.. burn the entire house down.

Somewhere within social media Dorner had also asked for a public apology for the racism within the department to which LA Police Chief Charlie Beck stated, "You're talking about a homicide suspect who has committed atrocious crimes," As for any apology, well, Dorner shouldn't hold his breath."

A seriously troubling aspect of this story, if you go by public reaction.... is: a larger percentage of the public is siding with the killer.