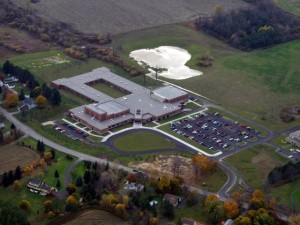 By now you’ve probably heard or read some level of information concerning the Le Roy, New York community and the breakout of an unknown illness that has now affected 16 students at Le Roy Jr/Sr High School.

If not – you can get up to date here. - Erin Brockovich And Le Roy Parents Demanding Answers.

A lot of bad information is floating around the Internet. There are a lot of rumors and a lot of unconfirmed, simple miscommunications. It’s not uncommon in a case like this because it’s an open mystery and no one really knows much of anything.

The fact above, coupled with the issue that the school district is not willing to work with independent environmentalists, leaves an open door for people to believe almost anything.

This article will attempt to bring new, confirmed facts and clear some of the confusion….

On Saturday Feb 4, Le Roy called a town meeting with the hopes of easing some community and parental concern. The result was not pretty and erupted into loud outbursts by some parents and concerned citizens. All alleged that the school was not doing enough and they were being denied information. Each was followed by loud applause.

The frustration in Le Roy is obviously climbing, but the media and community pressure doesn’t seem to be breaking down the stonewall of the school district.

It’s been no love affair with Bob Bowcock (associate of Erin Brockovich) and Kim Cox (Le Roy School Superintendent). The two first met on Saturday January 28, 2012. At that time Cox barred Bowcock from entering school property and called the police. From that point Cox released media statements explaining her actions and stating that she was protecting the rights of the school and the community.

Yesterday Bowcock shared his own letter, which he sent to Kim Cox on February 6, 2012. The letter is an effort to clear the miscommunication between them and an open request to collaborate efforts, work together and find answers for the children and the community of Le Roy.

Bowcock’s letter goes a little further and also sheds light, and confirms suspicions about some questionable issues regarding the chemical spill from the train wreck.

It is troubling that a town the size of Le Roy would have so little information about a story that would be top news in the community. Bowcock states that it’s required by NYDEC and the USEPA to have all spill and cleanup data on hand, yet the data does not exist or has not been released.

In her original letter Cox states the tests Bowcock wanted to conduct would not be deemed scientific, yet Bowcock says that he had no equipment with him and only wanted to have a look around.

He stated that he and Cox agreed to return to the school in one hour, where they would meet with the District Attorney. When Bowcock returned, he was met by Kim Cox holding her letter and accompanied by﻿ a press representative named Bill Albert.

Bowcock goes on to state that the indoor air-quality tests performed by GVEP (The school's testing company) would not be valid and not adequate for giving the “all clear” signal.

New information has been released by HLN that two teachers at the school got sick and lightheaded when standing near a vent inside the school. It was also reported there was an odor coming from the vent and the school handled the situation by simply opening the door. Bowcock mentions the vent in the letter to Cox and states that he’d like to discuss the issue with her.

He goes on to deny the Cox allegations that he staged any media escapades, disrupted the school, lied or was involved in any criminal activity that he’s been accused of.

At the end of his letter he again brings focus to the spill and confirms that it’s the biggest TCE spill in national history. He then puts some ease to community concerns by stating that the drinking water in the county is clean and safe, he would not remove his children from the school, the majority of Le Roy is safe and clean, but the community should be concerned with the area that has TCE on or under the land.

It has been stated by one parent in a television interview that the whole town knew that Erin Brockovich was coming to Le Roy because it was announced on TV and should’ve been no surprise when she and her team arrived.

There’s also new information that the EPA is taking a more active role and has released documents confriming the information.

Many doctors have suggested that the problem is PANDAS which is a neurological disorder that’s associated with Strep Throat. This would be good news for everyone involved as the illness can be easily treated with antibiotics. PANDAS occurs when your body’s antibodies attack the strep-infection but then go on to attack the brain.

While that diagnoses would be good news, it would not explain why 16 young people came down with PANDAS, or any illness, at the same time, in the same place.

The information below is according to Wikipedia…..

TCE was still used as an inhalation analgesic in childbirth given by self-administration. Fetal toxicity and concerns for carcinogenic potential of TCE led to its abandonment in the 1980s.

Recently it was announced by the USEPA (the United States Environmental Protection Agency) that the agency had completed its Final Health Assessment for Trichloroethylene and released a list of new TCE toxicity values. The results of the study have formally characterized the chemical as a human carcinogen and a non-carcinogenic health hazard.