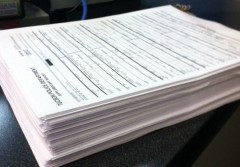 On Thursday 5/24/12, over 550 pages of documents, detailing the investigation of the Isabel Celis case, were released to the media.

The report is not a complete account of the investigation. Many documents were excluded and are being kept out of the public eye.

In the documents, some of the more delicate information (names, addresses and phone numbers) is blacked out but the main problem with the information is that it leaves more unanswered questions. If you’re expecting answers you’re going to be disappointed.

For the past 3 days East TN News has poured over the documents and there is some eye-opening information but nothing in the report gives much hope of finding Isabel.

Over 1500 leads have been reported to Tucson Police and the papers show the detailed, step by step, investigation into most of them.

At one point a man called from a nearby phone booth claiming that he had Isabel and if the police didn’t get there in ten minutes her would kill her. When the police arrived there was no one there.

Over the course of the investigation several potential sightings were reported but each proved to be a frustrating dead-end. One sighting included a big man dragging a girl, who fit Isabel’s description, into Tivoli Gardens Restaurant while the girl was throwing a fit.

Some of the most interesting information comes on the day of Isabel’s disappearance….

When police arrived at the Celis house, Isabel’s mother (Rebecca Celis) and Isabel’s two brothers were very emotional and crying but it does not include the father’s (Sergio Celis’) emotional state.

Rebecca immediately asked police if the Mexican border patrol had been notified and the report is somewhat troubling.

On that first day investigators asked Rebecca if there were any marital problems between her and Sergio. She answered, “No,” and said that everything was fine.

Around the outside of the Celis house suspicious footprints were discovered in the alleyway and on top of the utility box on the backside of the home.

A police dog picked up a scent that lead police to issue a nearby warrant.

Also on that first day, the police removed Isabel’s hairbrush from the home along with her toothbrush, a vinyl shower curtain and some other items.

There was “what appeared to be" blood inside the home but as of this date it’s not confirmed.

Taken from the car at the residence was a white hat that also has, what COULD BE, bloodstains on it.

All of the items are in testing.