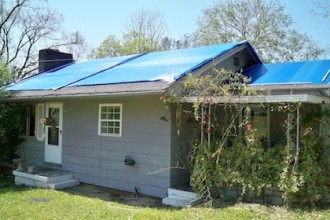 It doesn't get much lower: to take advantage of someone who is already suffering is about as horrible as it gets.

They've been dubbed "storm-chasers," and they go all over the country following natural disasters, preying on the elderly and the naive. I am not referring to the media people going around trying to capture severe weather in pictures and video. This is a different kind of "storm chaser" and we should all take personal offense.

They pose as contractors and they search neighborhoods for the working class and retired people. They scour the neighborhood looking for homes with obvious damage and simply knock on your door, make outrageous claims and attempt to gain your trust. Often they'll use older people and females to solicit the scam and to keep the resident in complete darkness.

In many cases, the insurance companies in the area affected by the storm are already booked and won't be able to assess your damage for another 30-60 days. This time period is an open door for storm chasers so they have to act quickly and target specific neighborhoods. They get in and out as fast as possible with their ultimate prey being the desperate elderly, frightened homeowner.

In other cases, the resident doesn't have insurance at all. Depending on the extent of the damage, they're forced to come up with the money and do something.

In most cases, the agenda is to get a down payment for the work that needs to be done. They'll give you bargain rates and use every lie in the book to get you to sign that check. They'll tell you that paying with a money order, a cashier's check or cash will allow them to get to work as soon as possible. They'll promise that no balance will be due for years after the work is complete, show you phony contracts, business licenses and give you phony referrals. Then they'll ask for referrals from you and most people are happy to recommend their friends and neighbors.

In most cases, no work is ever done. They'll get as many down payments as they can, cash or deposit them, then they'll be off to the next town. In other cases they'll start some sort of demolition (usually on the roof) then claim to run into worse problems than they originally thought. At that point they'll ask for more money and they'll continue with this method until the resident senses that something isn't right and stops handing over their money. At that - the scammer will be gone, leaving your home in worse shape then it originally was.

These people need to be stopped. They are not only doing financial damage to local residents, but they're also doing major damage to the mental health of our community. It destroys the natural human need and desire to have hope in our fellow human beings.

Many people in East TN are suffering. At times like this it's imperative that we all pull together and lend a hand. We have to protect and help our own people. Please warn and educate your neighbors. The storm chasers are in our area and have been spotted in South and West Knoxville.

East TN is not used to people like this because we are not used to being hit by such devastation; however, the scammers' practices are common in disaster zones, particularly in Florida and parts of Texas.

No legitimate local contractor is going to knock on doors, so this is your first "heads up" that something isn't right. Any legitimate contractor in/from East TN is quite busy right now and will be continuing to get referrals for many months. In most cases it would not make time management or business sense to go door to door unless something was wrong.

The man who knocked on my door looked trustworthy. He was in his mid 50s and drove a gray, mid-90s Ford pickup truck. He had a notebook and a pen in his hand and told me why he was there. He looked like any self-employed contractor from the area until he started talking. At that point, I noticed a faint accent that certainly wasn't from East TN. Over 50% of the houses in my area have severe roof damage and most are "tarped" to keep the rain out of the house until their insurance and contractors can get to their house. It's not hard to see who has damage and which homes to target.

I decided to "play along" and get as much information as I could. We began walking around the yard while I verbally listed the damage. I told him of foundation damage stating that it was shifted and cracking horizontally. His response was, "No problem." Then I knew and became angry over the fact that he was a scammer.

Being I am the first house in the neighborhood I told him that all my neighbors had been warned about storm chasers. I told him I knew what he was up to and that he would be reported. I asked him where he was from. Naturally, he continued lying but it was obvious that he was making his way to his truck. Although I tried my best to get his license plate, he had parked in a way that made it impossible and he was quickly gone.

Since the incident I have contacted many local politicians, the Knoxville Police, Governor Haslam's office, Bob Cooper's office and others in an attempt to get a public announcement to the residents of East TN. To date, nothing that I know of has been done so I decided to write this article to at least prepare the Knoxville Daily Sun readers.

• Look at the tags on their trucks to see if they're from out of state.

• Research the company on the internet.

• DO NOT pay any up-front money.

• Report anyone who knocks on your door.

• Please be careful. Try to be patient with your insurance company. If you're uninsured please think long and hard before handing over your money to ANY contractor.

• Above all, please warn and educate your friends, co-workers and neighbors.