Homelessness in Knoxville - the Reality 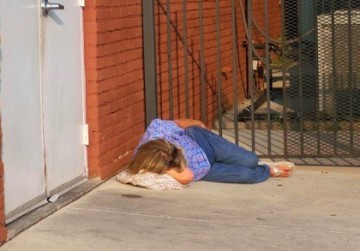 ﻿Whether anyone's solution is selfish and fails or is brilliant and succeeds – the problem of homelessness belongs to all of us. It doesn't matter where you stand: the problem is ours. Anyone in denial of that statement need only arrive at Broadway and 5th Ave at 3:45PM, park in the Salvation Army parking lot and look around.

A number of factors will be addressed in this series on homelessness in Knoxville:

• Cost to taxpayers next year

• Possible solutions are out there

• Efforts that are working now

• Where our obligations begin and end

• People and organizations profiting from homelessness

• Whether proposed ideas will work or not

• What the truth is

• Who wants to help

• Who has failed at trying to help the homeless

• What politicians have to say

• What the homeless have to say

• What taxpayers have to say

• What a homeless person deals with every day

• How the homeless exist

• Where the homeless sleep

• What do homeless people eat

• How homeless people are treated

• How to look for the truth

• Where do you begin to help the homeless

Each case of homelessness is unique to the homeless person; therefore, each case has to be addressed using a different creative strategy. The word "help" itself is different for each individual.

Too often a mismanaged bureaucracy who knows nothing more than stats and numbers will throw more money at the problem which will do nothing but ignite an already out of control fire. Stating that a program has helped the homeless population by 11% means that 89% were not helped. Has anyone researched this 89%? Are their problems even worse because of the program? Has the program increased violence on the streets? Has it slowed down or stopped the potential homeless population currently living in poverty and one step from being homeless? Will this-year's 11% success rate increase next year's homeless population by 20%?

Attempting to digest the entire issue in one sitting is impossible and will overwhelm you. At that the reader is apt to give up and turn back to their own issues and personal problems but, like it or not, it is your own personal issue and problem.

A home: the fundamental root of society. We need a place to go, to put our stuff, to be safe, to relax, to be proud-of . . . or do we? A quickly-growing percentage of the homeless population is crossing a certain threshold where little to nothing can be done. For this percentage the best we can do right now is offer a hot meal, a blanket, a temporary bed, or a prayer. The key for them is to be prepared when, and if, they decide they need us. For many, when your dignity is lost and you have no self-confidence the all-important foundation of a home simply crumbles. A place in society is not for you yet it doesn't mean you are beneath it. On the contrary, in many cases, the homeless person feels that he or she is above it. Because they are not a piece of the world's puzzle does not always mean they have failed.

"It's not hard, John. That's the problem with you people. You make everything so complicated! You just stop caring. That's all. You just don't care anymore." (Rita, a homeless drifter from Pensacola, Florida)

A person who lost their family and their home and suffered a nervous breakdown will eventually decide that caring about ANYTHING is too painful. It's the simple "pain/pleasure principle" They can now live their life in the moment, there's no longer any bills, there are no mouths to feed, there's no one blaming them or making them feel bad. Many are convinced that they're not strong enough for society's ways. The longer they spend on the streets the closer they will come to this point. If they no longer care about their future or themselves, they will no longer care about anything. Their health (mental and physical) will become your problem, not theirs. Our laws, our thoughts, passions and everything else will not be relative to their existence. How do you take someone who (in their own mind) has succeeded greatly by no longer caring and ask him or her to care again? How do you ask them to return to all the misery, heartbreak, pressure, career, etc. which will eventually lead them back to chronic failure?

The problem is if we continue to do nothing or we don't soon find a program or a combination of programs that actually works, the percentage who cross this line will snowball and we will find ourselves with a very serious socioeconomic issue.

With these facts in mind, it is imperative to "get to the homeless person while they still care; in the early stages of homelessness or before they are homeless, while they're living in poverty, when they just lost their job, while they're going through divorce, while they are having a nervous breakdown, etc."

An interview with Steve, a 28 year old homeless man and small time drug-dealer living on the streets of Knoxville:

John: Give the people something to make sense of this. Wouldn't it be easier to get a job? Surely, even if you get some crappy job and some dumpy apartment in the middle of a rotten neighborhood, it has to be better than the cold and the danger and the plain insecurity of the streets.

Steve: It's about the way that you think. You're comparing yourself with me, and it can't be compared. I don't think like you. I don't want to think like you. I stopped buying their lies. You, to me, are a naive puppet in society. You go out and you buy things that people convince you that you need. You do what they tell you to do. I don't. I don't answer to anyone. There ain't [sic] no one telling me what to do. I do what I want.

John: So what's your goal? Something is keeping you alive. What do you dream about? What are you living for?

Steve: Crack, drinking, cocaine, meth, oxy ... anything I can get my hands on.

John: What about your health? If you get too sick or unstable you won't be able to do what you do.

(Steve looked away and refused to acknowledge the question so I moved on before he lost all attention.)

John: Don't you miss it? You're not a bad looking guy, Steve, and you're not stupid. I can see you getting cleaned up, finding a good job, making a fortune, falling in love, raising a family, all of it.

Steve: No. I don't miss it. I had all that. That life came closer to killing me than this life ever did. No, I don't miss it one bit. You wake up and you have a million problems. Most of them can't be solved. They're all puppets and liars. They pretend to be happy, but they're miserable. I see it every day. When I wake up I have one problem and I can always solve it. I do it every day.

John: Are you getting dope?

John: That takes money. Where do you get your money?

Again Steve refused to give me a straight answer on that question. I tried to reinforce that I wasn't a cop and he could tell me the truth, but he would simply repeat that he had his ways. You could tell that his focus and attention was no longer on speaking with me, so I thanked him and walked back to my car.

I was grateful that Steve wasn't attempting to hustle you or me. What he stated was his truth: he doesn't like us. "He's okay, we are not." This problem can be addressed, but it will take an expert sociologist and will never be addressed until Steve himself is ready to address it.

If the interview continued I would've given Steve a scenario; "a job he loves to do, a lifestyle and a home he loves to maintain." You can be a part of society without being like everyone else. The world's most successful people lived their own way and blazed their own path but maybe Steve has never seen that. Maybe that's why he gave up and became so bitter.

I can hear some of the readers tell me that he's merely justifying his own failure. "No one ever gave me anything! I worked my whole life for everything I have." My response is: "Thank you. Thank you for being a valuable, productive member of the Knoxville Community. You have a lot of strength and you probably had great parents. I applaud that. My only hope is that you never take that for granted. Cherish your own strength. Many people don't have it."

So what do you do? The very first thing is to remind yourself not to throw a blanket on the homeless people and lump them into this or any other category. Not everyone is as far along as Steve and Rita. That's not to say that it's too late for either of them, but we are limited because we waited too long.

That said, there's a lot that you can do, and I will address all of it in the upcoming parts of this series. I want to give you hope and am anxious to show you the great things that are being done right out on the streets of Knoxville. There are many wonderful people in East Tennessee who truly do care. I see them out there every day doing everything they can to give their brothers and sisters a chance. These wonderful people will be spotlighted and recognized in the upcoming parts of this series.

Is the homeless population growing? Yes

Are there people getting off the streets? Yes.

Are there some organizations ripping off the contributors and taxpayers? Yes.

Are there some organizations helping and making a difference? Yes.

For you to lose hope would leave the homeless with no hope at all. It's just not always a quick and easy fix. If you can find a way to rekindle someone's own faith and belief in themselves it would be a wonderful place to begin. It will begin to heal them like no medicine ever could, but it doesn't mean they are going to stay healed. It will take more but I know that the people of East Tennessee can live up to this challenge.