The debate began in mid April with Andy Holt (Rep. Andy Holt, R-Dresden - District 76) sponsoring a bill requiring investigators, animal rights organizations and the media turn over the evidence of animal abuse to authorities within 48 hours.

To get someone prosecuted for animal cruelty takes a proven pattern of repeated abuse. Detailed investigations resulting in prosecution often take many weeks and months. The bill would succeed in making it impossible to stop Tennessee’s wide spread animal abuse problem and virtually hand a license to abusers to continue business as usual.

One or two people opposing HB 1191/SB 1248 (The Ag-Gag bill), would’ve went unheard but many thousands banned together and created so much attention it was impossible for anyone, particularly Governor Haslam, to ignore.

Carrie Underwood was one of the first to speak out and bring public attention to the issue. Underwood stated on Twitter: “Shame on TN lawmakers for passing the Ag Gag bill. If Gov. Bill Haslam signs this, he needs to expect me at his front door. Who's with me?”

This resulted in Andy Holt making the dreaded political mistake of publically bullying Carrie Underwood. While she remained quiet and quite busy with her tour, her fans and friends took over and fired back on Holt. Joining the outcry were many celebrities including Emmylou Harris, Jennifer Goodwin and Pricilla Presley.

The celebrities and their fans were not alone: At the same time Haslam was handed the bill, a petition with over 33,000 signatures arrived on his desk asking him to veto it.

HB 1191/SB 1248 arrived on Haslam's desk Monday May 6. By that point the opposition to the bill resulted in a massive public debate with much of the focus targeted at TN's Special-interest politicians.

Many religious groups, including 300 ministers representing hundreds of thousands have also asked Haslam to veto the bill.

30 Newspapers (once again led by Nashville's "The Tennessean") and 60 Animal Rights Groups have also spoken out against the bill.

The greatest thing about watching, and taking part in, the Ag-Gag controversy was seeing conservatives, liberals and independents coming together, never mentioning partisan politics and joining forces opposing this bill while giving the millions of abused animals their long-awaited voice.

While feeling the public pressure, Haslam remained very careful and would only make the statement that he’s going over the details of the bill. The Governor sought the opinion of Attorney General Bob Cooper. Cooper then sent out a press release and surmised the bill was unconstitutional.

The public was first informed of the bill when The Humane Society of The United states sent an article to all their members. With the release they included a video detailing an extensive investigation on TN Walking Horse Trainer - Jackie McConnell. The video was graphic and showed McConnell applying mustard oil (an illegal mixture of chemicals) to the pasterns, bulbs of heel, or coronary band of the horses to prepare them to compete in TN Walking Horse competitions. 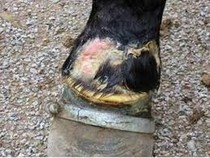 It’s called “soring.” SORING is a painful practice used to accentuate a horse's gait in Tennessee Walking Horse competition. This is accomplished by irritating the forelegs through the injection or application of chemical or mechanical irritants. The ankles of the horse are wrapped after chemicals are applied and the chemicals eat into the flesh of the horse causing extreme pain when the horse puts weight on their front legs.

As a sored horse tries to escape the pain in his front feet and lower legs, he snatches them up quickly, which gives the "desired effect" of tremendous lift in the front, known as the "big lick." - The horse is attempting to escape their pain by putting more pressure on their back legs... Experts say the practice is more common than the general public knows and as many as 76% of TN Walking Horses are sored. The percentage quickly grows higher with the winning horses and results in the horses being worth several millions of dollars. This brutal practice began with competitions first started in 1935.

Throughout HSUS’s video it shows McConnell beating the horse when the it attempted to escape their pain by laying down. The investigation resulted in the arrest of McConnell and his inevitable prosecution.

Shortly after the story died down in the media another case sprang up in Maryville, TN involving another TN Walking Horse trainer Larry Joe Wheelon whose horses were confiscated after 19 tested positive for soring and many jars of mustard oil where found at the location where the training was taking place.

Of the people publically supporting the bill on social media… one quick look on their own social media pages reveled that most were deeply involved in the TN Walking Horse industry. Some were more heavily involved than others but all were succeeding in making themselves very transparent. Many openly defended Jackie McConnell and Larry Joe Wheelon and had long histories of opposing animal rights organizations and activists - basically stating that the way they treat their animals is no one’s business but their own. Their voices grew more angry and hate-driven until some had their social media accounts suspended. When they realized just how transparent they were, and while the opposition to the bill grew stronger, their voices faded away giving almost 100% opposition to bill. When the smoke cleared; for every one person supporting the bill, 500 openly opposed it.

The people, particularly the people of TN, should be proud for standing up and giving a voice to the voiceless.

The debate and protest of the bill is expected to continue through the weekend.

Governor Haslam finally stated that he would make his final decision on the bill Monday, May 13.

Published at East TN News Saturday, May 11, 2013
all rights reserved