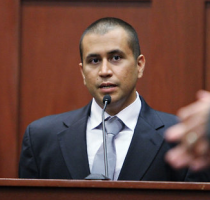 Entering the courtroom in a dark blue suit and starched white shirt, Zimmerman looked calm and well-poised, like a Wall Street businessman entering his office.

The courtroom went silent as he took a seat at the microphone and spoke publicly for the first time.

What could he have to say? Zimmerman looked over at Trayvon’s parents and apologized, saying he did not know Trayvon was so young and thought he was around his own age.. “I wanted to say I am sorry for the loss of your son. I thought he was a little bit younger than I am. I did not know if he was armed or not.”

Trayvon’s parents (Tracy Martin and Sybrina Fulton) showed little emotion and would not comment after the hearing.

State Prosecutor, Angela Corey, requested and hoped the bail would be set at 1-million dollars. She didn’t get what she asked for. Bail was set at $150,000.

Neither side is allowed to have any contact with the other and Zimmerman is not allowed to talk to any witnesses in the case. He is also is forbidden alcohol and firearms and he is being monitored electronically. A curfew was also imposed and he must be at his home between the hours of 7pm and 6am. He’s also obligated to check in with authorities every 3 days.

Benjamin Crump is Tracy Martin and Sabrina Fulton personal lawyer. He labeled Zimmerman’s apology “self-serving and a ploy to get the bail set as low as possible.”

In all - the hearing lasted two hours and included Zimmerman’s wife, Sheila Zimmerman, calling-in on speaker phone to act as a character witness and testify that she would inform law enforcement if she lost contact with him during his release.

Zimmerman, who has been receiving death threats, will remain in jail for the next several days to install the electronic monitor and to secure his new location.