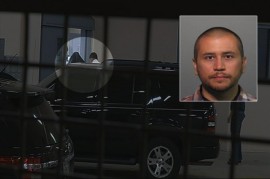 George Zimmerman Back Behind Bars

On Friday 6/1/2012, a Florida judge declared that George Zimmerman and his wife both lied about their finances during the original bond hearing and on the paperwork. They also failed to report a recently obtained passport that would allow Zimmerman to leave the country. The judge revoked Zimmerman’s bond and gave him 48 hours to surrender himself to the state.

Zimmerman had until 2:30pm EST., 6/3/12 to surrender to the state of Florida. After that he would be declared a wanted fugitive from justice.

He arrived back to Sanford Florida early Sunday morning and, at around 1:30pm, surrendered himself to at Seminole County Jail in Sanford, Florida.

In full view of the waiting media, he was escorted into the jail and a few people commented on his appearance. No longer looking like the businessman in the tailored suit - Zimmerman had let his hair grow out and was now carrying a few extra pounds.

After going through the booking process, for his own protection, he was placed administrative confinement.