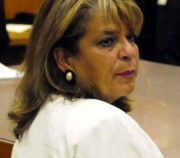 At 6pm this evening EST, Angela Corey, the Florida prosecutor in The Trayvon Martin case, will announce a decision on whether or not to prosecute George Zimmerman.

Zimmerman is no longer in Florida and his exact-whereabouts are unknown. He is now refusing to cooperate with the prosecutor (answer questions, give location, etc).

This case will either be dropped or Zimmerman will be arrested and charged at 6pm tonight.

Zimmerman has stated in the past that he would turn himself in if he were officially charged. This may've changed.