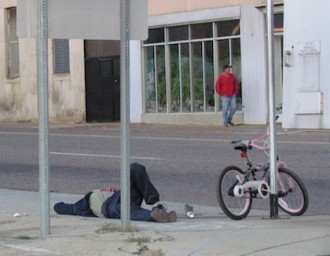 On August 15, 2011 Compassion Knoxville finalized and released their newest report.

In the past the failing efforts to address Knoxville's homeless issue have largely come from service providers and local government. The difference with Compassion Knoxville is that it's a broad-based citizen-led effort to gather public input.

The recommendations from concerned citizens came in public meetings and online. They are divided into 8 categories with separate recommendations for each topic. I briefly had a chance to skim through the report and will later go back for my own in-depth study and article on the subject.

Padgett continues by addressing some of the highlights of the report such as focusing on unemployment, job training, prevention methods, affordable housing, drug and alcohol addiction, and mental illness.

He goes on to say that nearly 45,000 Knoxvillians live at or below the poverty line and many are just a missed paycheck away from becoming homeless. "Everyone deserves the chance to access affordable housing in a safe neighborhood."

Padgett then proves that he's not a newbie to the issue by acknowledging the failure of the ten-year plan and stating that he's not an advocate of permanent supportive housing scattered throughout our community. "We need to redirect that funding to address the root causes of homelessness."

Padgett ends by mentioning that he's concerned with how Compassion Knoxville will pay for the recommendations and says the issue was not mentioned in the report. He states, "I believe we need a mix of public and private financing solutions that Knoxville can afford. I look forward to the next phase of discussion and debate."   The full report can be read here www.compassionknoxville.com.