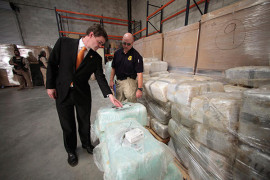 Yesterday was a busy day for Colorado Police: They rounded up and arrested 80 people involved in trafficking drugs from Mexico. The one-day bust is one of the biggest in national history and by far the biggest in Colorado history.

Most drug investigations focus on low-level dealers but this one was different….

It all began with one investigation back in December 2009.  After a string of very violent gang-robberies in the Denver area, police opened an investigation on a Denver Gang known as “Hoppin’ Hooded Bandits.” The money from those robberies gave the gang the resources to begin a high-scale narcotics network.

At the same time they were investigating the Hoppin’ Hooded Bandits, three other drug investigations were going on and, at some point, police discovered they were all interwoven.

Yesterday’s arrests focused on the bosses, money launderers and the people responsible for bringing it over national lines.

Over 500 members of state and federal law enforcement agencies were involved in the sweep but it’s still not over: 97 people have been charged and, to date, 17 are still on the loose.

Police are also saying that yesterday’s arrests are likely to lead them to solving open homicide cases in the Denver area.