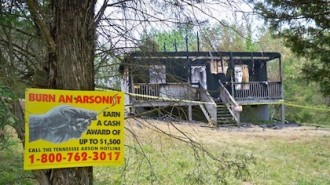 Knoxville Fire department are offering a $1,500 reward for information leading to the arrest of the arsonist(s) responsible for at least 5 fires on May 28, 2011.

Firefighters in South Knoxville couldn't get a break last Saturday night (Memorial Day weekend). Each time they got one fire under control they were called to scene of another one.

It all started at 9pm on May 28th at 4312 Edington Rd. That fire resulted in the house next door (4314 Edington) catching fire and resident Arlene Morgan losing everything she owned. The houses in this neighborhood are close together and without the quick response of the fire department it could have easily turned into a major disaster for the whole area.

Still, it was just the beginning: In the span of just a few hours, four homes and two dumpsters were set on fire -- all in the South Knoxville area.

The next call came 4 hours later (around 1am) to the scene at 4611 Okey Street, which is within walking distance of the Edington Rd fires.

Another 4 hours later (at around 5am) the fire department was called to yet another scene at 1516 Rugby Avenue, which is on the opposite side of Chapman Highway near south Knoxville Boulevard (an extension of James White Parkway).

The next call came from Southwood Apartments (within a stone's throw of the Rugby incident). Southwood reported that two of their dumpsters were on fire and at this time some local panic began to set in. No one was quite sure where the next call would come from as police began scouring the entire south Knoxville community.

Witnesses have similar stories and investigators only describe the suspects as two males.

All cases have similarities. Three of the houses where the fires were started were abandoned. Both areas of town are in, or very close to, high crime neighborhoods. Both parts of town have had higher-than-normal house fires reported in the area.

Investigators are suspecting that whoever is responsible is connected to previous fires in and around Knoxville. One man was questioned on Wednesday June 1st but was soon released.