Another Look At Alcohol 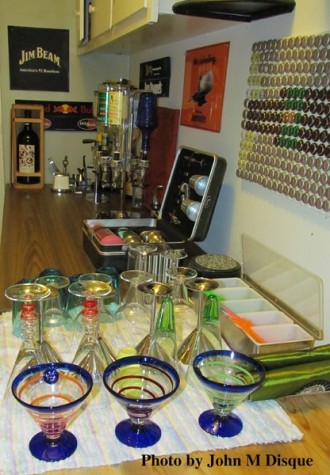 I looked long and hard at this photo and all the colors and shapes and reflections. It was taken in my home and I couldn’t help but notice that the upside down bottles of shot-glass-pourers looked a lot like oxygen tanks.

I had a lawyer friend who was a major alcoholic and literally drank himself straight into his grave. It wasn’t a slow form of suicide. It was the only way he could live and remain true to who he really was.

My friend’s theory: alcohol doesn’t change people – it magnifies who they really are, removes the curtain, eliminates the consequences, etc., therefore, if the person is abusive while drinking – they’re really an abusive person. If they’re violent, reckless, happy, overly grateful, creative, sloppy, deep, depressed, funny, brilliant, productive or whatever… (There’s many types)…. it’s who they truly are… It’s just that they’re suppressing it when they’re sober. The alcohol simply hands them a license to be who they are.

The old saying: “It takes one to know one,” has always been very true.

When I took Brad’s theory and expanded on it, I discovered: ﻿It does not always mean the angry drunk is an internally angry person and here is where it gets a little tricky – It depends on how much the person drinks.

The difference between a casual drinker and hard-core drinker..

While there are many differences between a casual drinker and an alcoholic, the biggest one is: the casual drinker is simply releasing the suppression of one or two days… (Example: They’re mad at their boss and really wanted to tell him to go to hell but they didn’t want to deal with the consequences so they went out and had a drink. Naturally – this person is apt to get angry while drinking and God help them if their boss is in the room). This same person (the casual drinker) may’ve hit the lottery today and the result will be: extreme happiness while intoxicated. This is not what the hard-core drinker is doing.

Alcohol takes on a whole different life, purpose and definition in the hard-core drinker. While sober, the practicing alcoholic is suppressing their entire being (who they are as a person - not the day's or the week's events, not thier divorce or their lottery winnings but who they ARE as a human being) to the point of not being able to function without the alcohol.

Some people tend to suppress the good things about themselves... This is often a result of bad parenting... Ex: If you were punished for something you created when you were a child (something you were proud of)... or if you got punished for being smart... etc.. (whatever)... that creativity or intelligence is still there but, in some people, they only have a license to release their talent when they're drinking... This is the gateway to alcoholism... because it gets to a point where the person cannot create or be intelligent without a drink.

If their creative side is their profession - you have a serious problem. In most cases the public never knows the person is intoxicated. If the person is rewarded by society for this creativity - an association is formed... and alcohol becomes just as important as oxygen.

It’s imperative to note: some of the most brilliant and creative people in the world have been hard-core drinkers. The United States Constitution and the Declaration Of Independence would probably not exist without the extreme role of alcohol. Most of the movies, music, paintings, sculptures and books would not have been created. Most of the cures for disease would not have been developed. The list is as long as the list of professions.

If you step back and think about the issue you’ll see how horribly sad it is. Unless they’re hurting someone, everyone should be supported and loved for who they truly are. This includes loving and supporting themselves. While sober, the alcoholic cannot get through this barrier. They will tell you they’ve tried. They will show you proof that they tried and they will show you evidence of how they suffered when they tried. To continue through a life that’s not a miserable suppression of themselves – the alcohol is not a choice at all.

We probably all know at least one person dealing with the issue… and perhaps even you-yourself.

My hope - in the very least this article will open new doors to insight and will allow people to be less judgmental and more compassionate.

I can assure you - no one wants to grow up and be an alcoholic. When we understand that they're not all bad people... (Just like anything - There’s good people who drink and don't drink, bad people who drink and don’t drink). While alcohol does magnify who the person really is - who the person is - is not always a bad thing. It doesn’t mean we have to live with it or like it or condone it… just that a new way of thinking about something can do nothing but good.

The following message is to the serious drinkers of the world..

This article is written in the name of Bradford Author and all of my brothers and sisters (black, white, rich, poor, Republican, Democrat, Independent, young, old, blue collar, white color, religious, atheist, agnostic, and every other kind of person worldwide)… who are dealing with this issue… Some of us understand, and at least that’s a place to start.

Back to Social Issues

You are welcome to comment or ask questions. You do not have to sign up for anything and your email address is not viewable by the public. Also - we will not sell your information or spam you. All we ask is: please keep the conversation civil.