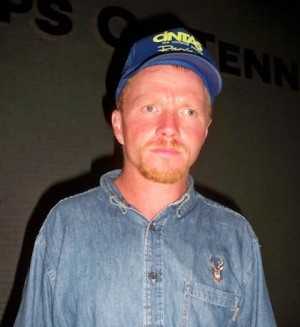 I was coming home from a low-paying gig in Fountain City, The Elvis Extravaganza. With a pocket full of nothing and bottle of gin in the back of my van, I had to drive down Broadway on my way home when I decided to take my Elvis money and invest it in the city of Knoxville.

I came across a white, middle-aged male who was carrying a backpack. His name turned out to be TJ (in photo on left). TJ was from North Carolina, recently divorced, 41 years old, currently unemployed, drifting, a lost alcoholic with a combination of mental and physical disabilities.

John: Here's the deal: I'll make this worth your time. You're going to have to trust me for a few minutes. Okay? Don't try to con me. Don't try to hustle me. I'm with the Knoxville media. I'm connected with many Internet outlets along with the local media. What I know is: Everyone's story is different. Tonight we want to know yours.

At that there was a pause. I guess he was taking all of that in. At the same time there was some kind of pride mixed with some kind of shock. I had just pulled up beside him in an empty parking lot. He could have robbed me right then and there, but to me it was worth the risk. He took off his backpack, he was nodding, looking me in the eyes and then he said….

TJ: It's about time! You want to know my story?

John: Are you homeless?

John: Are you from Knoxville?

TJ: No John: Are you from somewhere? Do you have a place you call, or used to call, home?

TJ: I was here about 7 years ago when my wife was pregnant. We came here for a bridal show. I'm from North Carolina.

John: How long have you been homeless?

TJ: About a year.

John: Are you just passing through? Is Knoxville your destination? Are you headed somewhere?

Again, there was a pause. I wanted TJ to elaborate, and he struggled to do so, but there wasn't anything to add. It was true. He didn't know.

At first glance TJ seemed like your typical blue-collar person. He wasn't stupid. He understood my questions, and he gave clear answers without straying or rambling. He wasn't filthy, he wasn't stoned. You could tell he wasn't your typical street hustler. Then, on a closer look, as he grew more comfortable with me and I with him, you could begin to see that something was wrong. His eyes would drift. One would focus on me, and the other would look around. When I first recognized this it scared me. I could easily see how he could be ostracized or labeled insane, and lose self-confidence for just this single reason. Still, I decided to push through and ignore the issue. I'm glad I did.

John: People want to know how someone winds up in your shoes. Are you a drifter?

At that he smiled, and it seemed like he, along with the world, just opened up and he let us all in.

TJ's smile turned to tears in a matter of two seconds at which time he literally broke down in front of me. What started as a tough, white, drifting, middle-aged male turned into a hopeless, lost ball of Jello.

John: Are you on government assistance?

John: Are you running from the law?

John: When was the last time you ate?

TJ: Yesterday. Sometimes I go a few days without eating. I've lost a lot of weight.

TJ: Sometimes… I don't worry much anymore. I used to worry a lot. It always works out. I got a blanket in my pack.

John: Are you on drugs?

John: Are you an alcoholic?

He broke down again, and it became clear that TJ was suffering from depression. How deep and serious that depression is was another matter. That's about all he could muster. He struggled to continue and elaborate on his son and after a brief period, he pulled himself together.

John: Are you still married?

TJ: No, we got divorced.

John: Did she divorce you?

TJ: We both agreed that it was best for everyone. I still love her. I was sick.

John: There's no one in North Carolina who would help you?

TJ: I have 14 brothers and sisters. Three of my sisters died this last year.

As TJ began to tell me how they died, drifting off the main topic, he told me to watch out for the person to my right. At first I assumed he was talking about some street punk or drug dealer; however, when I looked over I saw a police car sitting at the intersection and an officer looking over at us.

John: I should probably get out and explain what I'm doing but I probably smell like alcohol so we're just going to make this fast, okay?

TJ: They don't know you?

John: I don't know. If they don't, they will soon. He's probably going to circle around the block and come back, so I'm going to get your picture real quick. Is that okay?

TJ said it was fine and asked me if I wanted him to remove his hat. It made me smile, and I insisted that he just be himself.

TJ: OK. Did you get it? (Referring to the picture)

John: Yeah, I got it. Thanks. That leaves 11 brothers and sisters. None of them would help you?

TJ: They ain't [sic] in no [sic] position to help me, and I wouldn't ask them anyway. I don't like asking for help. I can do it myself. I did it before.

John: You've struggled with the bottle your whole life?

John: Electricians make good money. How did you lose your job?

TJ: They were cutting back because of the economy but they were keeping the best, and I'm the best they ever had. Some new guy smelled it and snitched on me so he could keep his job. They did what they had to do. John: The new guy smelled the alcohol?

TJ: Yeah, but I wasn't drinking that day. It was from the night before. Me and my wife got into it. She was driving me crazy. I had to do something. They caught me before and warned me. I had made promises. It's my own fault. I know that. I don't blame them. They gotta [sic] protect their business.

At that I was somewhat speechless, and things got quiet. At the same time I could see the whole story, and I knew I had it.

TJ never asked for anything from me. I offered it. I believe he would've agreed to the interview without the money.

I told him where he could get some food, which was only a block away. (I was referring to the Knox-Area Rescue Mission currently celebrating their 50th year. Located at 418 North Broadway 'in the heart of the city of Knoxville. They can be reached on the net at www.karm.org or by phone at 673-6540.) I told him where to stay away from, what was going on under the bridges and highway system, and I asked him to be careful.

John: I know you're going to buy alcohol with that but keep this in mind… We're not a net for the country's homeless, but there are people in Knoxville who can and will help you. I think our taxpayers just want to give people a fare chance. They're also getting real sick of people taking advantage of them. There are good people here, but they don't want to be hustled. We'll give you a chance if you want it.

John: If this cop stops you tell him I'm a writer for the local press and I interviewed you for an upcoming article. I'm getting out of here. Good luck and welcome to Knoxville

TJ: (Walking closer to my windo,w TJ punched my arm like guys do.) OK. Thanks brother.

John: Hey T! (Pointing over at a downtown building.) You see that building over there? The tall, shiny one that says First Tennessee? A few nights ago I was on the top floor of that building having cocktails with some of the most powerful people in the state.

He knew there was a reason I was telling him that, and I think he expected me to continue, but I wanted T to write his own beginning and ending to both of our stories. I stopped, and he just stood there smiling as I pulled away.

Helping the homeless is not "a handout." It's an investment. There's a heavy price that they pay. The goal should be: a chance for the homeless person to rebuild, to someday give back and become a productive member in the community. We somehow have to convey this message to the homeless people. Sometimes all it takes is a safe place to catch their breath, a decent meal, medical attention, a decent job, a hot shower, or just a friend. It can be done. My entire life is proof that it can be done.

A person who was once as lost and as homeless as TJ wrote this article. I am where I am today because someone took the time, the patience, the love, humanity and money (yes – the money) to give me another chance.

If you take anything from this article please try to find the strength to admit that your blanket statements are wrong. Each of our stories are unique, and there are some of us who just need and deserve a little help. Again – some of us will abuse and take advantage of your humanity, but some of us will recognize that we're getting another chance and we'll prove to you that it's all we needed.