A Closer Look at Homelessness in Knoxville 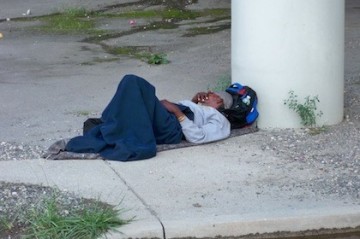 I see my job as a writer and photographer to take you places that you cannot visit yourself and to break the boundaries of your thoughts and feelings. I want to open you back up to the truth and give you another chance or another view at things you may not have to deal with, see or think about every day.

People often make a blanket statement about homelessness and say that they're all homeless because they're lazy, or they're stupid, they're taking advantage of the system, they're crazy, they're hustlers, they're drug-addicts, they don't want to work, etc. Most of those statements are motivated by anger, frustration, cowardice and ignorance.

I can assure you that no one wants to be homeless. No one says, in his or her youth, "When I grow up I want to be homeless." That said there are many people living on the streets of America who are their own worst enemy. Many of the homeless population are addicted to drugs, others are alcoholics or are suffering from mental problems, and some are hiding from the law. There are also those who are extremely angry or irresponsible, and the list goes on and on. Their issues are still fixable. They're just more complicated. Still there are many who are there because of nothing more than sheer bad luck.

If there is one repeating theme throughout my research, it's the fact that each person has a different story. So how do I begin to write an article and cover such a wide range of issues? How do I conclude anything?

We've all struggled through hard times. We all have a vice. We've all suffered, we've all been afraid, we've all run, made bad choices, and we've all failed. The main difference with us is that we have friends and family who have helped us. If you look deeply and honestly into your own life, you will begin to see that someone was there and they kept us from giving up on ourselves. For most of us it was our family or friends, for others it was the church, and for some it was nothing more than the time, generosity and understanding of a complete stranger. We got another chance, and we managed to find the strength within ourselves to try again. Many of us were simply born into the proper support. Some of us managed to surround ourselves with the right people and, again, if you can be honest with yourself for just a minute, you'll begin to see that you got lucky. It could be you walking aimlessly around the city of Knoxville; alone, scared, cold, hungry, sick, depressed, lost, and disconnected from everything.

For the next six weeks, I will be publishing one-on-one interviews with homeless people, a list of local agencies that provide assistance to the homeless, information on what the City of Knoxville is doing to attempt to end homelessness in our city, and a photo gallery of homelessness.