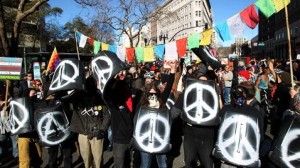 The original story included nineteen people arrested and three police injured when authorities attempted to disperse the protestors. At 4:00pm the situation was under control but Oakland’s nightmare was not over.

Ninety minutes after we reported on the story the protestors re-formed at another downtown location with plans to take over another building.

Police clashed with protestors again and many arrests would be made after protestors broke into City Hall and stole an American flag. At that point more stories began circulating the Internet reporting that 100 people were arrested but the story was still not over…

By late Saturday night over 400 arrests were made and the protestors left a trail of destruction throughout the city.

Some protestors interviewed by LA Times stated that Police did not attempt a peaceful breakup of the crowd. On the contrary, they are saying the police trapped them from all directions with the intent of violence and making arrests.

Oakland, CA has succeeded in becoming the capital of The Occupy Wall Street Movement and, due to the media attention; movements across the country have been rekindled. Unfortunately some are following Oakland’s violent lead with more arrests being made in Atlanta and DC.