Who is John Sevier? An Introduction 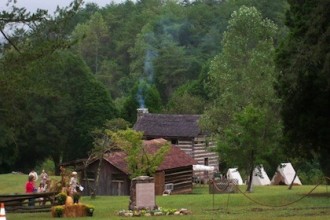 Not everyone knows who John Sevier is. Even more so, there are many people right here in East Tennessee not familiar with the history of this famous character. The years 1745 to 1815 might seem like a million years ago but it’s really not as far away as you think.

Perhaps people would become interested if they knew what they were missing. The information would enrich their lives with a deeper respect and a greater appreciation for the things our forefathers went through, fought for, sacrificed, stood for, and died for. That newfound respect could only enhance their lives. It would give them and their children and grandchildren a stronger foundation to build their own lives. Furthermore, it would give them a sense of belonging and they would begin to see a broader picture. Their own lives would make more sense and the freedom that we often take for granted may well be recognized and finally rewarded.

John Sevier was born on September 23, 1745 in New Market, Virginia. His father was from London, England and his mother was born in America. To begin your perspective: he died September 25, 1815 at the age of seventy in Knoxville. During those seventy years, his accomplishments were nothing short of astounding.

Although the first part of his life was spent in Virginia, Sevier decided to settle in East Tennessee at the age of 28 (1773) with his wife and children while exploring the region and searching for more fertile land. Twelve years after settling in Tennessee he moved-to and became the governor of Franklin (a self-proclaimed state of its own which was part of what we now know as North Carolina). He remained as Governor of that region from 1785-1789 (ages 40-44).

When the state of Franklin was taken over by North Carolina and it was no longer recognized as a state, Governor Sevier moved back to the East Tennessee area and settled in what is now widely known as South Knoxville. From that point he would become the first governor of Tennessee and serve two full terms (1796-1801 and 1803-1809).

In 1809 he went on to serve in the Tennessee State Senate and in 1811 until his death in 1815 he served on the United States House of Representatives.

During his life, Sevier fathered 18 children; ten by his first wife, Sarah Hawkins. (He and Sarah were married when John was 16 years old and Sarah was 15.) He had 8 children with his second wife, Catherine "Bonnie Kate" Sherrill.

I'll confess that not long ago I was one of the people I spoke about at the beginning of this article. I knew he was some kind of key figure in the Revolutionary War era and I knew he had a lot of political power, but I didn't know what made him different from all the rest of the war figures and politicians. When taking pictures of downtown Knoxville I came across the monuments, statues, and plaques in front of the old Knoxville courthouse. I read the words engraved in the stones and I became interested in the history. I began poking around the Internet. Then I attended the John Sevier Days Festival at Marble Springs in September 2010. There I had the pleasure of being greeted and welcomed by a member of the board of directors, Dr. Michael Toomey. From there my interest would only skyrocket.

The more I learned the more intrigued I became and the more I would dig into his history. His accomplishments and his stories are endless. Today, I could fill a library with all the information I gathered. I feel like I know him personally. When visiting his home site I really felt like I was close to him and could feel his strength and courage. I also felt that 1796 wasn't a million years ago. In fact, it suddenly seemed a whole lot closer.

Regarding war, politics and culture: When you compare John Sevier's time and "his reasons" with the times of today the truth of everything starts to dawn on you. Governor Sevier was, in fact, the original master problem solver. He was confronted daily with issues that would make today's political leaders run home to their mothers. His decisions and actions were anything but self-serving and they weren't short term band-aids used to get him reelected or keep him in power. He led at a time when leaders weren't bought with campaign contributions from multi-billion dollar corporations. He didn't put up signs and billboards on every corner. There was no radio or television to lie to. He wasn't born into ideal circumstances yet everything he did affects our daily lives and will continue to affect us all, not just the people of Knoxville and Tennessee -- all of the people of the United States of America for centuries to come. John Sevier was the truest, bravest, most selfless man of his own time, a natural born leader. This fact was recognized by the people of Tennessee and we, in turn, asked him to lead us. He had one key, motivating thought and question: "What is best for ALL of the people?" (Farmers, business owners, mothers, fathers, children, the people just arriving to America and the people who will be arriving for many years to come). "How can I protect them all and how will my decisions continue to protect them long after I am gone?"

It's important for the reader to recognize that this is just a brief introduction to who John Sevier is. My agenda is to intrigue you and get you started. I highly recommend that you do your own research. A good place to start is to visit his home site at Marble Springs State Historic Site at 1220 John Sevier Highway. I can only promise that you'll be rewarded with an enriched life, a deeper respect, a greater appreciation and a much stronger foundation.