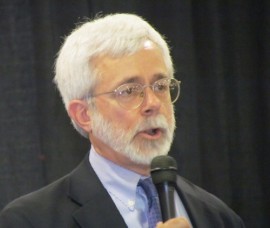 Who is Joe Hultquist?

The ballot now includes 5 candidates (Rogero, Padgett, Harmon, Bennett and Hultquist). The first question that came to my mind was: Does he have a chance? Haven't a large percentage of the voters already chosen their favorite candidate and made up their mind?

Surprisingly, Hultquist's entire agenda doesn't center on "win or lose." He believes that his presence will force the dialog of the mayor's race to increase and spend more time and energy on serious issues like growth and Knoxville's future.

He says that he's been considering running for some time, that his former position as City Council lead him to the idea but prior obligations with East TN Quality Growth (an East TN organization that helps governments and business develop vision, growth and plans of action to obtain that vision) forced him to wait.

Hultquist was a councilman a little over 8 years (from 2001 to 2009) and is no stranger to Knoxville politics. In fact, he was a huge part of Knoxville's past growth and success and is quite focused on continuing Knoxville's growth, particularly the south waterfront area. Hultquits states, "You can't get ahead of the market. You have to work in-tandem with the market… with private investment. The other side of that coin is: it has to be 'driven' by someone who has that vision, who has the passion and who has an understanding of the mechanics of it, the value of it and how it all works and comes together. I think I can offer that."

There are some issues that a politician or candidate will avoid because focusing on the issue is not likely to get them votes. The Knoxville homeless issue is a good example. Due to the fact that there's so much controversy with the Ten Year Plan and because the homeless community is not the biggest voter-base many politicians see the issue as counter productive no matter what side they stand on or what their plan of action is. At the same time a candidate or politician taking on the issue can highlight a true, unselfish concern with the entire community.

I was happy to see Erica Estep on TN This Week ask Hultquist about the Knoxville homeless problem, but I was happier to see that he doesn't shy away from the issue.

Hultquist first speaks on the 10 Year Plan and states that it has only been revisited, not revamped, and says the issue needs to be seriously rethought, restructured and a new plan set into action in Knoxville.

While on a trip to Austin TX in 2009 Hultquist was steered to San Antonio to find and talk about their aggressive and successful approach to the issue. San Antonio managed to research 150 different programs throughout the country then took the best of each and developed their own called (Haven for Hope). Haven For Hope is an organization started by civic leader Bill Greehey in 2006 after 18 months of intense research. While most programs focus on addressing the needs of the homeless, Haven for Hope addresses the causes of homelessness such as: education, job training and behavior health.

Hultquist saw something that was dramatically different than anyone in this area has done and would like to see Knoxville take the same type of approach.

A politician's words don't impress me very much. I'll take note their words and hold them to following through, but, over the years, from local to nation: the taxpayers have heard everything they could want to hear and more. Anyone can stand on a stage and say anything they want so, like many of us, I tend to look closer at their actions. The question becomes: Has Joe Hultquist delivered? Yes, he has -- but will it be enough?

As I stated in the beginning: many of the voters have already made up their mind. Hultquist is going to have to be very aggressive in his campaign and really stand out for the voters to even take interest. Once he succeeds in capturing their attention, he is truly going to have to shine.