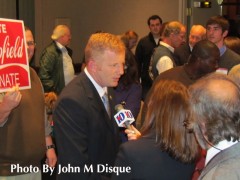 His political career began in 2004 when he was elected to the TN House Of Representatives and, almost from the start; he has found himself in a firestorm of controversy.

Campfield is known to be very active on the Internet, especially via his blog, where, in the past, he openly attacked Mike Ragsdale, who was Knox County Mayor at the time. The articles created a lot of attention and some of the local media came to Ragsdale’s defense leaving Campfield with an ever-growing list of enemies.

In 2005 he made more enemies in the black community when he stated that the Black Caucus was a racist organization for restricting their membership based on race.

Throughout the years: voter eligibility for felons, abortion issues, handgun laws, homosexuality topics in schools and illegal immigration laws have paved the way for even more controversy.

One of Campfield’s most interesting proposals came in 2009 when he suggested limiting the amount of lottery winnings to $600 for anyone on public assistance. He stated that people on public assistance should not be buying lottery tickets and instead should be using that money to buy food for their children. There was already a law prohibiting the purchase of lottery tickets with public assistance money but, if the bill had passed, it would’ve decreased the state’s revenue by about 6 million dollars. It was denied in a subcommittee hearing.

In 2011 he revised his “anti-gay education” bill and Campfield met his biggest firestorm to date. Many big names in the entertainment and political world said it encouraged dishonesty and would increase the gay teen suicide rate. The topic of bullying gay teens was addressed and Campfield said that he supported anti-bullying laws. Later he would go on to say that the whole bullying topic was the biggest lark out there.

Lately Campfield has been pushing for closed primary elections, making only members of that party eligible to vote. He says that members of opposing parties often vote for the weakest candidate, which creates a better chance for their party’s nominee during the general election.

In January 2012, Campfield stated to talk radio host - Michelangelo Signorile, "Most people realize that AIDS came from the homosexual community – it was one guy screwing a monkey, if I recall correctly, and then having sex with men. It was an airline pilot, if I recall.... My understanding is that it is virtually – not completely, but virtually – impossible to contract AIDS through heterosexual sex...very rarely transmitted." Medical authorities disagree.

Once again, as you can imagine, Campfield found himself in the middle of the backlash and controversy. During the somewhat-national outrage he was denied service at a local Knoxville Restaurant (The Bistro) and asked to leave. Naturally, he took his victim-status to the Internet. The reaction has been mixed.

Campfield updates his blog often and any visitor will see that he goes on and on about many different topics. Not all of them are controversial and some actually make perfect sense, but most magnify his desire to be in the spotlight at all costs. 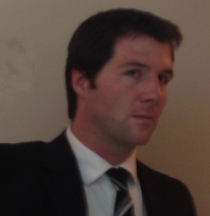 Brian Stevens recently announced that he’d be running head to head against Stacey Campfield for 7th District State Senate in 2014.

Although there’s over two years until the polls open, there’s already a buzz brewing in the community. All of Campfield’s media attention has come with growing opposition and many people are asking: who is Brian Stevens?

Currently known as a superb public speaker, Brian is a professional lecturer who teaches statistics at the University of Tennessee. For most of his adult years UT has been the center of his existence. He’s a popular staple on campus and, within five minutes of meeting him, you’ll see his passion for the school and the entire education system. Today he still lives near campus and holds a Masters degree in Business Analytics.

Minority discrimination is a serious problem all over the nation but, for various reasons, the issue is festering and growing worse in some parts of the country: Knoxville is one of them. Opposed to representing select groups of people, Stevens wants to be an ally to all minority groups and focus his campaign, political career and legislation on representing ALL the citizens of his district and state.

Stevens is constantly meeting with people to develop ideas and strategies that address Tennessee’s consistently low ranking education system. He’s particularly concerned with the rising cost of college and protecting the existing scholarship and grant programs.

Attracting new business to TN while giving existing businesses new opportunities to expand are priorities on Stevens’ platform. He supports some of the recent legislation that has passed Governor Haslam’s desk and intends to help meet Haslam’s business objectives.

Stevens supported the Scenic Vistas Protection Act, a bill that would’ve ended mountain top coal mining in TN on the grounds of environmental protection. Mike McDonald, who sponsored the bill says, “We have lost eight mountains since 2008 by delaying. If we don’t vote this year, we will lose more mountains.” After a subcommittee hearing in April 2012, the bill was sidelined again and sent to a summer study session.

He says that his passion for teaching and analytics goes hand In hand with his political goals and plans. Brian states, “I believe teachers and politicians are here to help people, sadly politicians rarely meet this objective.  I've worked on my communication skills and can productively communicate to individuals or large audiences.”

On a personal note - Stevens is an accomplished musician who plays many instruments but specializes in piano and keyboards. He has many friends from all walks of life and, in his rare spare time, he loves nothing more than getting together with them.

As for his work - his students and fellow educators are constantly praising him for his teaching abilities. Analytics can be a somewhat boring subject but he's known for making it fun and interesting.

Stevens’ leadership abilities, passion, intelligence-level and political-focus are readily apparent, but he knows and accepts that it’s going to be a long, tough, uphill campaign. Overcoming Campfield’s media popularity and experience is not going to be an easy task. That said, he and the growing circle around him are convinced that, if the public hears him out, they’ll support him.