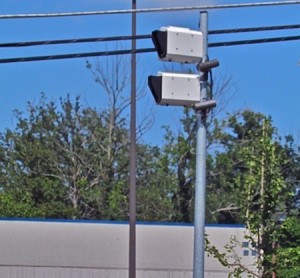 The Red Light Camera issue was brought up at the most previous mayoral debate. The issue has been stewing in the community for years, but now the community itself seems to have reached a boiling point.

A somewhat angry audience member gave an example of how he had to bend the law to avoid a collision. He then suggested that most of the audience would agree the cameras are a “revenue pump” that has nothing to do with safety. The question was laid before the panel which consisted of 4 of the 5 candidates for City Mayor.

Ivan Harmon – Stated that when he's elected mayor he would implement an order that the cameras' yellow light be extended 5 seconds. "I'm going to put it on the referendum and let the people decide if they want the cameras inside the city or not."

Madeline Rogero – Stated her support of the cameras, says she has met with the Police Department and knows the cameras have improved safety at those intersections. She confessed to receiving a turning on red ticket and stated that she should have fully stopped .

Joe Hultquist also confessed to receiving a ticket. Hultquist states, "I voted against the red light camera system when it initially came before the city council. I wasn't confident then that it was something that made sense." Hultquist said he was concerned that it was an undo intrusion on personal privacy and rights and also concerned about how it was actually going to function. "If I'm mayor I will not support that system. I'm willing to take it to referendum, but I will not support it."

Mark Padgett – Stated that he did not support the red light camera system as a revenue generator and was glad to see some of the legislation come out of the Haslam Administration to keep that from happening. Padgett then said he was open minded on the issue and willing to listen to all sides. "Where I sit today I'd love to see it put on the referendum and let the voters decide where they want it to be."

Since the debate the issue has continued to arise on social media, but I hadn't heard anyone talk about the new referendum.

Would the issue go to public vote? Would it be put on the September Primary Election ballot? Is there any news on this issue? I called Mayor Brown's Office who said they didn't know and connected me to the Election Commission. They informed me that it had to be petitioned and that no one has petitioned it.

The cameras are creating further mistrust and a dangerous angry void between local government and average residents; this in a time when many people are attempting to create government transparency, openness and community trust.

Today it is being suggested by many that when the yellow light is extended by just 1 second it reduces the number of tickets and makes the cameras unprofitable. At that point the cameras are usually removed. Why wasn't this the "virtually 0 cost solution" before the cameras were installed?

Too many times bad business and bad government will attempt to address an issue by creating another one or by creating an abundance of issues. It is argued that the cameras free up the police force to focus on other issues. That would suggest that the police force is understaffed. Being understaffed is the problem that needs to be addressed. Anything that doesn't address it would add up to a weak justification.

Another weak justification is that the cameras increase safety. Fifty percent of urban crashes and thirty percent of rural crashes occur at junctions. Is it wise to license bad drivers and then attempt to govern them with unconstitutional solutions? While the deadliest crashes are T-bone (usually caused by someone running a red light) the cameras have generated more rear-end collision crashes. The typical scenario is: A person will begin speeding up to get through a yellow light, notice the camera and slam on the brakes. What they don't notice is that the person in back of them is also speeding up to get through the light and the result is a rear end collision.

Another typical example is: A person stopping in the right hand lane to make a turn on red. Often they will creep up to see around the car in the left lane and to see if any cross traffic is coming. The driver behind them often takes for granted that they're making the turn, they're also looking left and the driver in front goes ahead to avoid the rear end collision.

I've heard many people state that they're receiving tickets for turning on red. They stopped for at least four seconds, the intersection did not have a "no turn on red" sign, turned when it was safe, and they still received a ticket in the mail.

Most people are not going to take off a day of work, or even a few hours of work, to contest a fifty dollar ticket so most complain about it but still pay it.

Another new issue is that many people are cutting through gas stations and shopping centers to avoid the cameras altogether. Naturally, this is illegal and is causing great safety issues with motorists and pedestrians. Being they also know the police are nowhere around because of the camera's chances are they'll avoid a ticket. This issue is never considered when they state their safety numbers.

When does it stop? While some cameras in places like ATMs and parking garages make perfect sense, local government seems to be pushing the boundaries. The problem with remaining silent is: the boundaries will continue to be pushed. Will they begin to show up in public restrooms? on your Street? in playgrounds?

To get the issue on referendum I created a petition on August 16, 2011: http://chn.ge/mVUnuQ