The Heart of the Padgett Plan 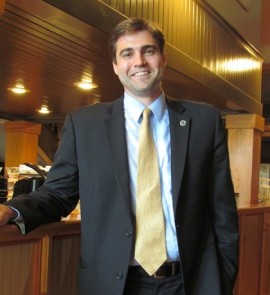 Laying down his policies in detail has not been easy. Although Padgett says it's an outline, to the general public it isn't. With a declining Internet attention span, the key is to get people not just to read it but to read it and think about it.

As you're reading the plan you'll start to have questions and concerns. If you continue reading, you'll find that they're answered and addressed in an eye-opening, no-nonsense approach.

While most politicians attempt to run on charm, personality and promises, Padgett gives clear, cost-effective solutions for most of Knoxville's major concerns. He is going "all in" at a time when others seem to be hung up and somewhat uncertain.

From there we go to a Table Of Contents and then a letter from Padgett to the Knoxville community explaining why he loves Knoxville, how he wants to move Knoxville forward, and why he's the man for the job. Also included is a charming picture of himself, his wife Katie, daughter Kirby, and their dog Captain ("Cappy").

The further you go into the plan the more things start coming together and you begin to realize that Padgett put a lot of time, thought and energy into it. It addresses past mistakes, looming issues, issues that a community can easily miss or overlook and concrete, well-thought-out solutions. Most of all, it addresses issues that have not been considered and can be put into immediate action to stabilize and grow our economy, secure our neighborhoods, unite our government with the community and give us all the entertainment, protection, security and financial potential we could hope for.

It's not to say that everything in the plan is 100% original. There's obviously a Haslam-influence and there are glimpses of other political and business leaders like Phil Bredesen and Padgett's own father, Mike. There are also a lot of similarities with Padgett and County Mayor Tim Burchett.

What Mark Padgett has done is he has laid everything on the table, expanded, improved-on and molded those ideas while brainstorming his own original ideas. This is what leaders do.

The ultimate conclusion is that he's ready, determined and prepared for the job.

All politicians can say whatever they want to say, but how often do they hand it to you? There's no getting out of this. He knows it, I know it and I hope you know it: This time we have it in writing.

It's your city Knoxville.