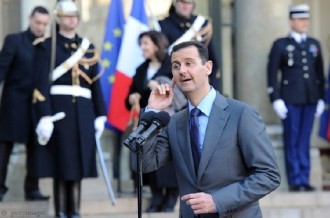 Our agenda is to uncomplicate the entire Syria-Issue and weed through the mountains of conflicting information. While that task might seem simple, it’s certainly not.

In one way or another, there are many countries involved while the US and the UN stand idle.

The civil unrest in Syria began with the Tunisian revolution. In Tunisia (a small Arab country) civil protests to overthrow their president, Ben Ali, began in December 2010. Although there would be much hardship and bloodshed, in January 2011 Ben Ali would flee to Saudi Arabia and the result was: the democratization of the country.

In March 2011 the Tunisian revolution reached Syria with the intent to overthrow the country’s dictator - President Bashar al-Assad. With the combination of some Syrian people and some Tunisian people, the protests were simple, peaceful demonstrations throughout the cities of Syria.

In April 2011 Assad took it to a new level and sent tanks and government military to the Syrian Cities. By mid April they had opened fire on the protestors and since then the violence has done nothing but escalate.

In a bizarre twist, many of the soldiers sent to fight off the protestors turned on the Syrian government and began fighting against the very army they were fighting for. That would bring on a full-scale Civil War while Assad downplays the entire issue and calls it a “foreign plot.”

The Arab League (an organization of 22 Arab States) has attempted peace proposals, which wound up backfiring when Assad agreed to the proposals and then stepped up the military assault.

Eventually Syria was expelled from the League but they weren’t altogether finished…. In January 2012 the Arab League offered another proposal for Assad to step down and begin negotiations to relinquish his power within two weeks. It was rejected and since then the bloodshed has skyrocketed.

Complicating the issue, supplying military arms and making billions from the war is both Russia and Iran.

Caught in the middle of both sides are the everyday people of Syria. The people of Homs are trapped in their homes with no access to food, water or medical supplies and as they attempt to leave their homes to flee the city or get supplies for their families – they are being gunned down in the streets.

In early February The United Nations was staged to press Syria into a resolution but the plan collapsed when Russia and China both vetoed the resolution. The result was: the deadliest string of Syrian violence to date. It’s now February 13 and it has not stopped.

Although some U.S. politicians, including Barack Obama and Hillary Clinton, have expressed outrage over the killing of women and children, there’s been no active stance in getting aid to the citizens of Syria.

France, Egypt, Germany, Greece, Kuwait and Tunisia have also spoken out against Assad, but Russia (Syria’s strongest ally) remains firm and has stated that they will veto any resolution.

The Syrian government is accusing the news media of exaggerating the violence and the death tolls of civilians. While the media has had no luck getting inside Syria, self-made videos are being smuggled out of Homs via the Internet.

We’ll let you decide if the violence is exaggerated.

Caution – The Videos below are very, very disturbing. If you are not emotionally prepared to see graphic, violent, inhumane war crimes – do not watch them.

On Friday February 10, a bipartisan group of senators called on Obama to provide direct material and technical assistance to Syria.

Sen. Bob Casey (D-PA) and Sen. Marco Rubio (R-FL) are leading the charge and urging Obama to take action and support an effective transition to a Syrian Democracy.

As of February 13 – there’s been no word from DC. The next SRFC business meeting is on Valentine's Day (tomorrow – Tuesday Feb 14). If passed – it will then go to the senate floor.