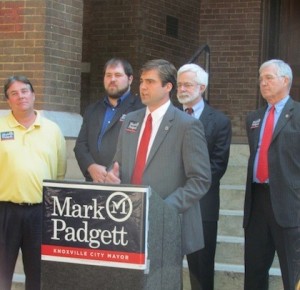 Just a few days after the primary and the release of The Padgett Plan some of the biggest names in the Knoxville community came out and gave Mark Padgett the nod.

Rumors started flying last night but at 1:00 pm today, on the lawn of the Old Court House, Ivan Harmon, Joe Hultquist, Bo Bennett, and Sheriff "J.J." Jones took turns making the official announcements while Padgett accepted and thanked each one.

"I'm proud to endorse Mark's candidacy to be Knoxville's next city mayor," said Ivan Harmon. Harmon then went on to speak about Padgett's pro-business and pro-neighborhood stance. Harmon added, "He has the heart and passion to serve our community, and he's a fiscal conservative who understands how to create jobs and grow our economy."

"He understands that Knoxville has to think regionally to grow the local economy and improve our quality of life," said Joe Hultquist.

Bo Bennett spoke about Padgett's character and pointed out that he possesses the things that Knoxville needs in our mayor.   J.J. Jones, who made the briefest speech, agreed with all and stressed Padgett's leadership abilities. "He understands that an involved community is a safe community and will be a great partner in making our neighborhoods stronger and safer," said Jones.

Other than the simple endorsements, all four stated that they'd join Padgett on the campaign trail to urge their friends, supporters and families to join the now extremely powerful Padgett candidacy.

"I'm humbled and honored to receive the full support from these public servants," Padgett said. "They share my vision and plan to move Knoxville forward and I'm dedicated to growing Knoxville's economy to make our neighborhoods stronger, safer and more connected and to make city government more efficient, transparent, and accessible. That's what I'm going to do for Knoxville every minute of every day. I urge everyone to make their voice heard and vote on November 8."