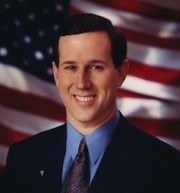 Santorum Calls It A Day

Rick Santorum will not be the president of the United States any time soon. On Tuesday April 10, 2012 he made the announcement that he’s dropping out of the race.

He said he made the decision over the past weekend. Santorum wants to focus more on his family, particularly his three-year-old daughter Bella, who suffers from a health condition called Trisomy 18.

Mitt Romney congratulated Santorum on a hard fought campaign and titled him: "An able and worthy competitor."

Santorum’s campaign has been an almost unpredictable roller coaster. At certain points he seemed to be taking over Romney’s strong-hold only to lose his grip on the next state and then rebound again.

Although there was an earlier social media-rumor that Santorum endorsed Romney – it’s not true. As of now (4/10/12) he has not endorsed anyone.

Both Newt Gingrich and Ron Paul say they’re in it all the way to the convention and aren’t going anywhere.