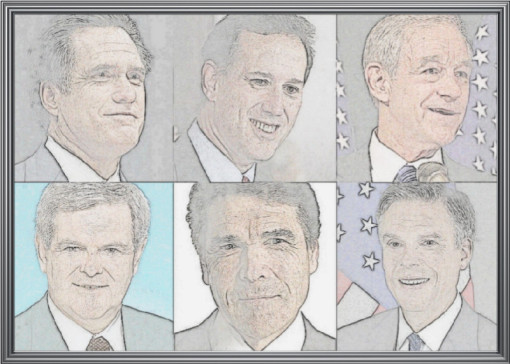 While the Iowa Caucuses held many surprises, drama and unexpected rises and falls in the numbers, the New Hampshire primary was a boring road map to “the expected.” The so-called political experts are facing hang-ups and open questions attempting to predict accurate numbers for the upcoming South Carolina primary election.

Will the front-runner, Mitt Romney, meet his match? Most people are saying and thinking, if Romney wins South Carolina chances are he’s going to be the Republican nominee to run against Barack Obama.

Romney’s strategy has switched from his negative ad-campaign against Gingrich to focused negative attention on Barack Obama which some are seeing as an almost arrogant attitude, as if to take for granted that he’s going to win the Republican nomination. In the meantime Romney’s opponents are focusing their negative energy on Romney.  The hot topic is: Romney’s business history with strong accusations of destroying American jobs while liquidating companies.

Gingrich, who found himself the victim of Romney’s negative Iowa campaign, was handed a 5 million dollar campaign contribution on 1/7/12 by Las Vegas Casino Mogul Sheldon Adelson and now has the finances to fire back on Romney. The Gingrich campaign has begun in SC with focus on Romney’s flip flopping abortion stance and labeling Romney a “Massachusetts Moderate.”

Many people are turned off by all the negative ads, which leaves an open door for Ron Paul who has had his hands full bringing in the new, the independent and the young voters. He and his passionate supporters are convinced that they’re Romney’s biggest threat for the White House bid. Ron Paul himself has been all smiles and seems to be enjoying his rock star status. With a third place finish in Iowa, and a second place finish in New Hampshire, some are saying it’s Paul’s turn step into first and take some of the front-runner's limelight.

Much of the Republican voter base is asking for a candidate who has a chance against Obama and they are seeing Romney as their man. Others, particularly the voters of SC, are asking all the right questions but it’s coming with their own frustration. Many want to get the focus back on issues like social security and Medicare.

Romney admits that South Carolina is an uphill climb. Last time he campaigned in the state he wasn’t exactly met with open arms and wound up with a 4th place finish.

South Carolina is set to vote on January 21.  When the polls close at 8PM on Saturday evening East TN News will have live election results as the ballads are counted, reported and official.