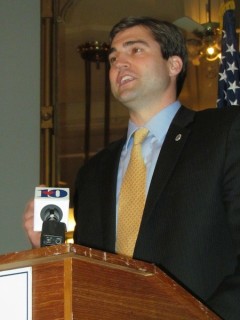 On Thursday Feb 10, 2011 Mark Padgett officially kicked off his campaign bid for Knoxville City Mayor at the historic L&N Station on the World's Fair Site.

Long before arriving at this event I wrote down a list of absolute vital issues our future mayor should focus on. There are 8 key areas surrounding Knoxville's future and well being. Each of the issues can be broken down into dozens of very detailed subcategories.

I didn't expect detail and it's probably too early for plans of action, but I did expect to hear what Mark Padgett and every other candidate for mayor is most concerned with. The last thing I wanted was another rhetoric speech of his ultimate goal to be governor and use Knoxville for his "high campaign step ladder." I also didn't want to witness a cheerleading session or a photo-op.

Perhaps I expect too much, but my time is valuable and the readers expect us all to get down to business. You can prove it to me and everyone I write for tonight. Other than the fact that you have a beautiful wife and child, you're very photogenic and you have a recognizable name. Why should we vote for you, Mr. Padgett?

Padgett opened by saying his decision to run for mayor was not easy nor taken lightly. He then went on to say he wanted to continue the progress that was made in the past 7 years in Knoxville and the more he thought about it the more convinced he became that he was the man for the job. "It's not the time for the same old politics. It's time for change, new ideas and new innovation."

While thanking his family and supporters he continued with a strong focus on local business growth and creating new Knoxville jobs. He highlighted his own experience in the business community by pointing to "eGovernment Solutions." At that he reinforced what he was saying by addressing the fact that he is a "step ahead" because he's the only person on the ballot who has actually created private-sector jobs.

After a round of applause, Padgett continued his kickoff by focusing on a major concern for Knoxville neighborhood safety (an often overlooked yet vital part of any healthy local government).

Next up was a detailed and passionate plan to continue revising the downtown area. Padgett detailed the key areas and projects he wants to continue throughout Gay Street, The Old City and all of downtown Knoxville while linking the projects to local jobs, more downtown visitors, and the urgency of continuing growth in the area.

At that he explained that tonight was just the beginning, that he would have time to hit on more issues soon, and that he realized people were busy and didn't want take up everyone's night. With that he closed by thanking everyone for coming out and walked over to give his wife and child a long hug.

Did Padgett deliver? Somewhat. He could have stood up there and done nothing more than thank his family and say how proud he was, but he hit on 3 of the 8 issues I am concerned about: With that he gained some respect and the benefit of the doubt. His passion is evident, along with his business experience and his support. While each candidate will be given a fair chance, Mr. Padgett is currently in the lead. We have a long way to go.

The closer we get to Election Day the more the candidates will be scrutinized.