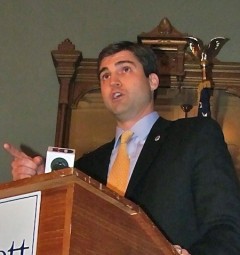 City Councilwoman Marilyn Roddy announced today that she is now running for the seat being vacated by Speaker Pro Tempore Jamie Woodson, a Republican representing the 6th District Senate seat in Knox County.

In response, Mark Padgett issued the following statement: "Marilyn Roddy is a dedicated public servant, and I wish her nothing but the best."

Padgett also reiterated his commitment to moving Knoxville forward:     "I'm 100 percent dedicated to strengthening Knoxville's economy and quality of life. The next Mayor of Knoxville is going to need the skills and ability to support existing local businesses, create jobs, recruit new companies, bolster emerging industries like solar, strengthen our neighborhoods, and continue the progress of downtown. As the only small business owner on the ballot, I'm uniquely qualified to move Knoxville forward into a world-class city with a great quality of life and booming economy.

"I would be honored to become the next Mayor of Knoxville, and I look forward to running a campaign focused on the future of Knoxville and the issues that matter most to our community."