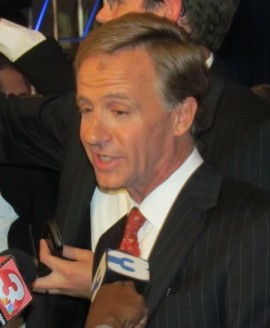 More Thoughtless Tennessee Laws Flying in the Face of the U.S. Constitution

For many years US counties and cities had their own laws to protect gay and lesbian people from being discriminated against. Here and there some of the laws needed to be tweaked and updated but, for the most part, the cities and counties were doing a great job.

Last week Tennessee Governor Bill Haslam passed a new law stating: "No local government shall by ordinance, resolution, or any other means impose on or make applicable to any person an anti-discrimination practice, standard, definition, or provision that shall deviate from, modify, supplement, add to, change, or vary in any manner from state law."

In short, our new governor took away gay and lesbian protection against discrimination as well as protection for students being bullied, and the result has been: a new lawsuit filed against the state of Tennessee by:

The National Center for Lesbian Rights and Morrison & Foerster.

As published in PinkPaper.com - Lead attorney Abby Rubenfeld said: "They passed a law based on disapproval of gay and transgender people, which the Tennessee and U.S. Constitutions do not permit."

We cannot afford to deal with probably, mistakes, rushed laws, incompetence, power tripping glorified mayors and ego-driven, homophobic, golden toilet paper fools. Tennessee laws are being passed with little thought, no regard to the US Constitution, no compassion and an 'us vs. them' government mentality."

This is just the beginning of what is taking place in our state capitol.

Imagine, just for a moment, that you're doubled over in extraordinary pain for hours and hours every day for the rest of your life because a doctor fouled up your surgery -- then your governor passes a law to protect the doctor.

Another new law puts a cap on medical malpractice lawsuits. Tennessee Governor Bill Haslam says it's just good business and your life is worth no more than $750,000 in compensatory damages (pain and suffering).

The chamber voted 72-for to 24-opposed, and the new law was passed in May 2011 but the hard-core questions are just now surfacing.

Haslam states, "We wanted to make sure we did everything we could to protect victims' rights but also have a predictable playing field for businesses."

So, someone's health, life, pain and suffering is a "playing field?"

I understand that something should be done about frivolous lawsuits, but if a doctor amputates my wrong arm I think it's worth more than $750,000. Haslam might not agree but it shouldn't be up to Haslam to dictate what my pain and suffering is worth. We had a court and jury system in place to decide what someone's pain and suffering is worth; however, a jury will never decide your case because your governor has already made that decision.

The nightmare has just begun:   Many of you read my article on the new "image law.”   Since the article was published, many more writers have picked up on the story and probed deeper. In a My Fox Memphis article Tennessee Senator Stacey Campfield shows his concern about the undefined phrase: "emotional distress."   What exactly "emotional distress" means can only be defined by the people who are about to enforce the law and that sums up the entire danger of the issue.

In the same My Fox Memphis article Senator Kelsey, who is also a lawyer, agrees that the wording is vague: Kelsey states, "For example, if a newscaster shows a mug shot on a news broadcast, and the mug will probably be viewed by the person in the picture and will probably cause some emotional distress to the person, so arguably that could be a criminal act now. So you can see the problem with the over breadth of the statue."

When asked why the wording is so vague Senator Kelsey continues by saying, "I hoped and requested an opinion from the Attorney General on these issues and at the end of session things were moving very quickly and sometimes you make a mistake. And I think this one part of this particular bill was a mistake."

The bottom line is that many people are concerned because they can literally picture the law being used as an open door for hidden agendas. Most people that work in the media have files of pictures on their computer that are upsetting and used to gain the public's attention. If we were all conformist angels we'd have newspapers filled with restaurant review and flower shops. America was built by those who pushed evolution and thought-lines with pictures and articles. It is your American Constitutional right to stir the pot, and Bill Haslam is not going to change that.

Anything and everything powerful (from a gun to the Internet) can be used for good or bad, but to punish the millions of great people for the very few bad is not fair and this law is (again) a blatant violation of the US Constitution. It flies directly in the face of the First Amendment and destroys the freedom of the press. The law makes us all vulnerable. If I'm the governor and I don't like you because you are gay, or you're not in my political party or you made me look like an idiot – I can simply put you in jail and point to the picture on your computer that frightened me.

When all of these stories started breaking I sat down with a very powerful member of the Knoxville community and the question was: Why are all these bills just flying through with very little opposition? Could it have anything to do with Haslam giving every state employee a 1.6% pay increase?