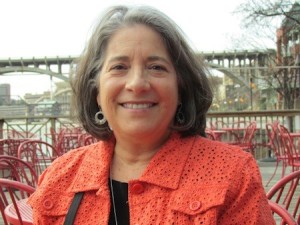 As most of you know Madeline Rogero, along with 3 other candidates, is running for Mayor of Knoxville.

While the experience speaks for itself I believe the ultimate issue is going to come down to "general instinct." When the average, hard-working, honest Knoxville citizen goes to the poles their decision is going be based on many things including experience, plans, contributions, promises, media coverage, etc: Do they like you as a person? Can they talk to you? Can they relate to you? Do they trust you?

There are a lot of things that set Rogero apart. Some of those things cannot be seen or read in news articles or numbers. Sometimes you have to go face to face with the subject and see for yourself. One day I received a Facebook message and was granted the privilege of doing just that.

On a beautiful sunny Friday afternoon Madeline and I sat on Calhoun's deck on the TN River and naturally discussed her campaign.

We got right to business. While there wasn't much small talk Mrs. Rogero is easy to talk with. There's an air of toughness: you can easily tell she's not someone to be pushed around and she wouldn't be easily intimidated but, at the same time, she's not intimidating herself. Talking with her is like talking to a family member or an old friend. There's no self-appointed throne. She's grounded in the very community that she wants to represent -- just like you or I or any of our compassionate neighbors.

This very issue answered some of my questions: namely, the interest that I took in the campaign contribution numbers. While Rogero didn't receive the highest total contributions of all four candidates she did have an incredibly high number of single contributions. Many of them were from people who don't have a lot of money. There were a lot of 25-dollar and 50-dollar contributions from the artist community and retired people in middle and lower class parts of town. These people believe in her. Now, I was face to face with why.

Rogero ran head to head against Bill Haslam in the 2003 mayor election. It was close but, in the end, we all know Haslam won. Still, the story doesn't end there. Three years later (in 2006) Bill Haslam asked Madeline Rogero to join his administration to go to work in the community development department. She took the job, and her success in the department speaks for itself. The fact that Haslam knew she was the right person also speaks volumes.

We spoke on Knoxville's success within the past 5-10 years and all the changes and new developments that have occurred. At the same time Rogero smiles and almost throws up her arms for the people to have a look around. From The Old City, the new downtown development, the waterfront, many neighborhood and community development projects and much more Mrs. Rogero played a vital role. "While some of the candidates are running on a hope to continue the success we're speaking of, I was a big part of all that," Rogero proudly states. "There's no one on the ballet with that kind of experience so there's no one better qualified to continue that success."

Rogero spoke a lot about her experience, her accomplishments and her past. While her name wasn't in the news every day she has 30 years of community experience inside and working on/with the front lines of local government and community development. She already knows everyone she'll be working with on a daily basis and won't have to go through the process of learning how a government operates.

America's Promise – The Alliance for Youth Executive

Director of Knoxville's Promise – The Alliance for Youth