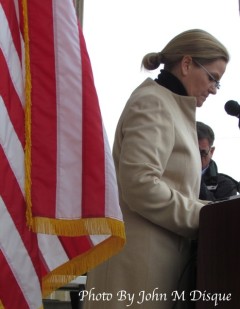 On February 11, 2013 Chuck Fritts went to media unleashing a number of allegations on Anderson County Mayor Terry Frank. In the past two weeks the allegations invreased in the public to the point of Mayor Frank feeling the need to call a press conference with the region’s biggest media. She apologized to the public and stated it was not her desire to play the issue out in the media but was left no choice when the allegations and rumors grew throughout the county.

Mayor Frank opened by claiming her mutual ground of wanting what’s best for Anderson County and stated there are a limited number of commissioners who haven’t moved past campaignment. Therefore stressing that the recent allegations made by Commissioner Fritts are politically/selfishly motivated and divert attention from the important issues or, what’s best for the people of the county.

The mayor defiantly stated, “Because Commissioner Fritts has challenged my very-honesty, I cannot be silent!” She went on to say, “Because Mr. Fritts attacked me in the media, I must respond in the media. I am sorry.”

“Commissioner Fritts has charged me with taking advantage of tax payers by using a county car and accepting travel payments. There are many statements being made about me. The people in this county may not like my politics, my method of attacking problems or my governments but there is one accusation that will never stick and that is: I would abuse your tax dollars for my own personal enrichment.”

The mayor summed up her 20 years involved with politics. Then she went on to say her office has been decorated, painted and furnished with her own money. She included office supplies, stamps and her cell phone at her own personal expense.

“First I will address the law – The travel money Commissioner Fritts accuses me of receiving is not travel money. It is a salary supplement added to the mayor’s salary back in the year 1988. The money is taxed according to the IRS rules and regulations with moneys withheld by FICA.”

The mayor went on to explain that the money is treated as salary and was voted out by Commission in 2011 and then voted back in shortly after in June 2011.

The supplement is $2,000. To acquire the travel money requires proof of travel, guidelines and receipts.

The Mayor then addressed the 1998 Crown Victoria accessed by county employees including Commissioner Chuck Fritts.

When a county employee uses the car, it’s recommended, but apparently not policy, that it is returned with a full tank of gas. Terry Frank went on to state that it was returned with a just a few gallons of gas when Commisiioner Fritts used it for Nashville trip. Frank went on to state she had just as much right as any county employee to use the vehicle but said she had never driven the car.

Many county mayors and employees including Commission Fritts himself have submitted requests for refunds for travel expense. She stated that 32 separate requests had been filed by Fritts. “Has Commisioner Fritts ever asked any mayor to refund supplemented money?” Mayor Frank pointed out that she was the only mayor targeted on the supplement-issue since it went into effect in 1988 - this being the issue that confirmed she was being targeted for political reasons.

The mayor stressed that the issues of her not requesting reimbursement did not make her superior to other mayors and they were all legally entitled. She stated that she didn’t request reimbursement because of our economic times and believed it was up to her to go the extra mile and set an example for her fellow county employees.

“While Commissioner Fritts has made false accusations on me, I am not going to go back in time and criticize his every travel reimbursement request. There were times when meals were provided at conferences he attended yet he claimed reimbursement for those meals. There were times he requested travel expenses well in advance of his travel, for instance two months ahead of time. That is not really the best business practice yet certainly not unlawful,” she stated.

Terry Frank ended the morning by asking for cooperation to work together with Commissioner Fritts and to rely on the records of facts, not gossip or innuendo. The mayor then uses a prop to get her point to hit home: a sign she hangs in her office: “Whatever your past has been, you have a spotless future.”

The mayor chose not to address any questions but offered official documentation addressing all of her statements. 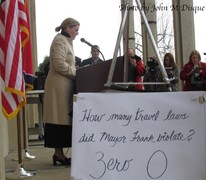