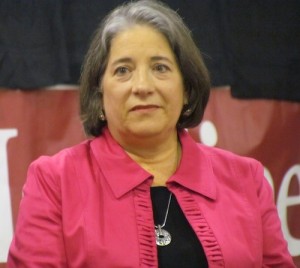 Madeline Rogero will spend some time making the transition from campaigning to taking her office as Mayor Of Knoxville. In the meantime there’s no doubt she’s "taking it all in" while getting straight to work. Transitioning into the mayor’s office is not an easy adjustment for anyone but, with all of Rogero’s experience and the fact that she knows everyone she’ll be working with – the transition may be easier for her than most other new mayors.

Many things stand out with her term: For one - She’s Knoxville's first female mayor. As Daniel Brown insisted on being named and known-as “Mayor Daniel Brown” and not “Daniel Brown - Knoxville's First Black Mayor” it’s the same issue for Rogero although she did state that she hoped it would inspire more women to get involved in politics.

It should also be noted (although the campaign and the term is considered nonpartisan) – she’s the first Democrat to take Knoxville’s Mayor’s office in nearly 30 years.

Rogero’s victory speech on Nov 8 was heartfelt and sincere. You could see that there was a sense of relief amongst everyone in the crowd and she was glad the campaign was finally over (350 days after it started). Her shoulders were relaxed and naturally she was all smiles as she took her time thanking everyone in the community.

On Mark Padgett – she congratulated him on running a very long and hard-fought race. Then she wished him and his wonderful family all the luck in the world.

Rogero also mentioned that she hoped Padgett stays involved in the community and that she looks forward to working with him for years to come.

Still smiling, our new mayor stated, “To those of you who supported Mark or the other candidates, and to those who did not vote: I intend to be a mayor for all of Knoxville, not just for the people who voted for me. Your voices—all voices—will be heard in my office in my administration.”

Rogero then went on to list her goals and focus for Knoxville. She then summed it up by stating she wanted to make a great city even greater.

Rogero’s support came from all parts of our community and she mentioned how proud she was to represent such a diverse and well-balanced representation of the Knoxville community; "white collar to blue collar; from labor to management; from every neighborhood north, south, east, west, and downtown. We welcomed people of all races and colors, gay and straight, people of all abilities, people from the youngest to the oldest, from the richest to the poorest."

Madeline then went on to thank her own family and stated how she wished she could individually thank everyone who made this victory happen.

…and all the volunteers.

Mayor Rogero ended by thanking all Knoxville citizens and promised to work tirelessly to serve us all.

Some of the keys in Madeline Rogero’s campaign couldn't be ignored. (Her lengthy experience, her prior campaign against Haslam, the work she did under the Haslam administration, her age, the incredible diversity and representation of her supporters and her long standing reputation).