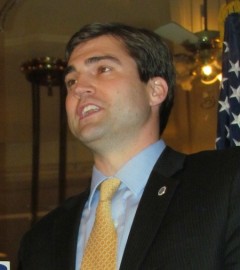 Hope (the All American dream) is dying and without it we have nothing. In my own mind, this is where it all starts but today's valid, cynical stance goes much deeper. Every Knoxville citizen wants to go to the polls and vote but I can assure you that no one's going to do it until first they have hope, then they have action, and then they have trust.

Sitting down at Remedy Coffee in the Old City with city mayoral candidate Mark Padgett on April 26th a few things came across real fast: He's confident, decisive, firm and controlled. The well-dressed Padgett smiles a lot and has a boyish charm while maintaining the manhood of his father. In fact, as I sat there and spoke with him I couldn't help but see his father in almost everything about him.

"I grew up in a family of politicians," Padgett says. "It was normal for me to be asked tough questions at a very early age. I'd be sitting at the breakfast table and I'd be asked which was better: Do you recycle or do you build a bigger incinerator? That's just one example of many and, at 7 years old, you're expected to have an answer."

That grooming did more than clear the path for a political mind. I believe it helped him with every aspect of his existence. It taught him to think outside of his own personal needs and experiences and address the needs of the masses. Whether Padgett is elected mayor of Knoxville or not - the way he was raised will continue to reflect in his business and personal success.

Although we spoke off the record about my own personal opinions concerning other candidates, the topic of "political mudslinging" came up. Padgett assured me that he would never stoop to that level. I sat there sipping my coffee in a comfortable, laidback atmosphere while he stated, "I'll continue to address what I'm doing and what I stand for and I'll keep the focus on myself."

Padgett has already taken steps to put his business in the hands of competent management so he can keep his priorities and complete energy on leading the city of Knoxville.   A

Although I tried to sway or bend him on an issue or two Padgett would just smile, look me in the eye and inform me that he's already thought the issue through, considered all options and made up his mind. The fact that we didn't see "eye to eye" on everything didn't really matter as long as the end result was the well being of every Knoxville resident. We talked about this issue and how people don't always have to agree with everything to support a candidate. At least the politician is addressing the issue, which conveys that it is a priority and that they care. The biggest lesson I've learned in the past year or two is that it takes many different types of people to reach an ultimate solution and run a government.

The following are my own words – "Yep – give me more skyscrapers, high-tech office buildings, thousands of jobs, and clear the path for the baby boomers' grandchildren. Let's make Knoxville "The San Francisco of the South." We'll add some more heart, keep the charm and create the very best city in America." That's just me. I suppose I'm a gambler but I've had to be. Padgett leans more to the "Haslam-approach" of concentrating on existing business and the realistic expectations of our infrastructure and budget.

We spoke of the Knoxville homeless issue and we agree that Knoxville does not have a housing problem. Padgett said, "Instead of focusing on housing for the homeless we should use more energy to concentrate on case-management and addressing the causes of homelessness. If elected Mayor, I'm going to work tirelessly to ensure that everyone in Knoxville realizes their value and feels engaged in our community. To move Knoxville forward, we're going to have to work together - it's as simple as that."

Padgett's plate is full. He's quite busy, to say the least, and plans to continue running his campaign full time the entire way through the primaries in September and until November.

As I started: The citizens of Knoxville want to go to the polls and be assured that checking that little box next to your name was the right thing to do. It has to give them hope, they have to see your actions and they have to trust you. We don't want to be your political stepping-stone, we need you to keep your ego in-check and we don't want you to forget that we're your employer.

I can tell you that Mark Padgett's parents raised a leader. At 33 years old Padgett's no-nonsense business mind comes shining through in his entire presence. He's well-beyond his years and if he's elected Knoxville Mayor you can be assured that you and your city are in good hands.