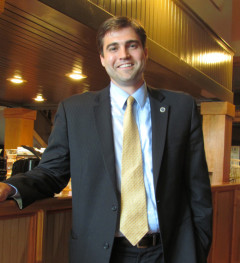 The questions are the same as they were last month: Did Padgett’s endorsements, political-plan and media-exposure gain him any votes? Will it be enough? Has “The Rogero-camp” increased, stayed the same or decreased?

Over the past 10 months I have been questioned, attacked, ridiculed and threatened and all I’ve done is: write-about and take a few pictures of the candidates (all 5).

None of it really bothered me. I’ve been through a whole lot worse but what I learned is: “it’s” never “the talker” – it’s always the "least expected"… It’s always “the quiet one" that you have to watch out for. I know you heard that before and now it’s time to know – it’s true.

Still – it raised a lot of questions. Most of all:…. “Is this how every Knoxville election goes?” If the answer is “yes” it’s really, truly ugly and if the entire agenda was to push me out of the way – you may’ve succeeded but, believe it or not, I have bigger fish to fry.

Many people said that I and the publications I write for  favored Mark Padgett but it’s not quite accurate. Who I favored was: the people of Knoxville. - Mark’s “PR people” kept me informed. I got daily updates on everything he was doing and even when I didn’t read the updates… everywhere I went – there he was.

Ivan Harmon, Joe Hultquist, Bo Bennett didn’t utilize the Internet. If I’m wrong about that and they tried – they failed.

Madeline Rogero communicated on the net but she didn’t understand that “there’s life outside of Facebook.” In fact – only about 15% of the voters utilize Facebook.

Padgett’s ability to hand-over Internet communications to the experts showed and proved his management skills. If you don’t know how-to, or don’t have the time-to do something – you hire an expert and that’s what he did. That showed all of us: he not only wanted it, he knew how to get it and he wasn’t about to fail. That fact in-itself showed me he could run our city.

After that it was the fact that he actually asked me for my input and made me feel like a vital member of the community. You might say that he “played on my ego” but I might say, “I have a lot to say,” and someone else might say, “Show me a man without an ego and I’ll show you a loser.” (D Trump)

At the same time Rogero lost about 50% of my support with her “unconstitutional red-light camera stance.” That in-itself is a very detailed and complicated issue that I wrote extensively about. The tone of her voice and her very demeanor proved that she was closed to any other view or input and that turned me off. I’m sorry Madeline but I don’t want to go to my mayor and be closed-off.

What topped it all was: her PR-people and her supporters - They hit below the belt. They were brutal and I couldn’t help but wonder why “people like that” would be attracted to her campaign or why she wouldn’t address it. In other words… “If this was any indication of what we’re in-for I cannot allow this to happen to my city.”

Frankly – Most of Knoxville is going to be just fine no matter who is voted for mayor. Who I’m not so sure-of is:  “The quiet one.”

Madeline's favorite color is obviously maroon which she and her supporters proudly display on campaign signs and t-shirts. Her favorite activities are kayaking, softball, beekeeping, bicycle riding and dancing.

Madeline is easy to talk to and doesn't always come across as the typical politician. She's more like "the neighbor" or "family member" that you can hang out with and talk about anything.

She's a hard worker and has been involved in politics and local community issues for nearly 30 years. She grew up in a family who had a great love for the outdoors and that's where she spend a large part of her childhood. Madeline lives in South Knoxville with her husband Gene who is a musician. They like to get together with friends and family and while Gene plays his piano, guitar or banjo, Madeline sings.

Gene and Madeline have 5 grown children and 4 grandchildren.   Although some people will have trouble picturing her adventurist side; a secret, little known fact is that she once jumped out of a plane and did a tandem skydive. (I believe she gets the adventure-side from her father who was a successful race car driver.)

Mark and his wife (Katie) just had a new baby boy, William Pierce Padgett, and now they have 2 children. The eldest is "the super-adorable Kirby" who's looking forward to spending time with her new little brother.

Along with the rest of their family the Padgetts are awfully proud of their dog "Captain" (Cappy) who has a personality and charm all his own. He certainly understands his rank and role and is perfectly content just being a part of the family. Cappy has become a sort of mascot in Mark's campaign.

Mark is a forth generation Knoxvillian and comes from a long line of proud, blue color-based politicians. His father, Mike, is long-time Knoxville leader in both business and politics.

Mark grew up in the Lonsdale and Halls communities and was raised in a "solution-based" atmosphere.

Favorite color: I think it's blue. Mark is also easy to talk to, very approachable and can talk about any subject political or not. He went to college on an athletic scholarship (basketball) and after graduating college he, starting from nothing, worked his way up to became a proud Tennessee business leader.