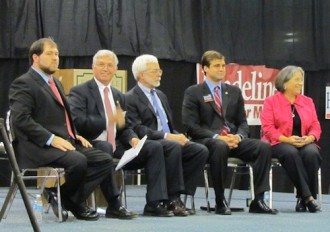 When I walked into the well-lit Expo Center tonight for the Knoxville Mayoral Debate, I was happy to see such a diverse and well-balance representation of guests. It seems that each part of town had an equal number of people and every age group was quite interested in what was about to take place. It's quite apparent that the entire community is very concerned with who is elected mayor of their city and it won't surprise me to see a record-breaking turnout for this year's election.

From the opening Ivan Harmon received the most and the loudest support of all five candidates. There was actually some hooping and hollering but I'll save that for another article.

Madeline Rogero also got her share of applause as the candidates gave their opening speeches and settled-in to take questions from the audience.

The first question was related to Knoxville jobs and what each candidate plans to do to bring more jobs to the Knoxville area.

Ivan Harmon voiced his concern for the matter and stated that he was going to be working closely with Nashville and Governor Haslam to create more growth and direct new business to Knoxville.

Bo Bennett stepped up and pointed out that he would work with what Knoxville already has and help small businesses grow while promoting new business and helping potential local entrepreneurs.

Joe Hultquist then stood up and stated that he would work to create the right environment for businesses to want to come to the area and for existing businesses to expand.

Madeline Rogero echoed Bo Bennett and then added that she would be out in the community working with the local businesses and entrepreneurs.

The next question drew some controversy as it seemed to be more geared to national politics, mentioning the war and Obama's plan to bring the troops home. On closer examination it was very related to Knoxville as the money being saved on the war-effort is being allocated to the states with each city receiving more funding. Unless I missed something, the question was: "What do you plan to do with the extra money?"

At this point, the moderator of the debate stepped in and pointed out that the issue of the troops coming home and whether the candidates agreed or disagreed with Obama's policy should not be addressed and is not relevant to this debate. The moderator received boos and the men seated in front of me were very audible about disagreeing, but the moderator remained firm and stated again that it was not relevant.

Madeline Rogero stood up and addressed it anyway and said, "I don't think there's a person in this room who wouldn't like to see our troops come home.

Mark Padgett said he would use the money to create more jobs.

Joe Hultquist stated that getting into national security issues would not be wise.

Ivan Harmon then stood up and stole the show again by stating that he was the only veteran on the panel and then went on to say he'd use the money to address Knoxville's constantly increasing homeless population.

Bo Bennett stated that it was not his place, nor was this the right forum to discuss the war.

The next question was in regards to Knoxville's Greenways, Parks and transportation.

While each candidate gave great answers, it was Mark Padgett's turn to steal the show. Padgett stated that he wanted to see Knoxville become the most connected city in the Southeast. At first I was somewhat confused, but he went on to elaborate. When he was finished I could actually see his vision. Imagine going out for your morning walk through the park which connects you to a jogging trail that leads you to a café for your morning breakfast, to finish your breakfast and walk out to a bus-stop that takes you to the office. Wouldn't that be incredible?

The next question had to do with balancing the city and making it less rich/poor or black/white.

Madeline Rogero was the first up, and stated that "a great city should be a seamless city where you can not tell the difference from one neighborhood to another." Rogero stressed that this has been the focus of her work as Community Development Director and she will continue to focus on revitalization and safety - particularly in the most distressed neighborhoods.

Mark Padgett then stood up and pointed out that he grew up in Lonsdale and knows the differences all too well. He stated that he wants to spend more time assessing the needs of each neighborhood and knows how it feels to have your neighborhood "overlooked."

Bennett instilled that we are all equal and deserve equal respect, while Harmon took the stage and said he would constantly be out in different parts of town to ask the people themselves what they feel can be done to make their neighborhoods safer, cleaner and more balanced.

At one point it was the question itself that stole the show. Unfortunately, it was met with some confusion and made some people uncomfortable but eventually the air was cleared and I determined on my own that the question was brilliant. In short, it had to do with government waste, fraud, and abuse. The bottom line was: what 2 areas of local government would you hand over to the private sector to avoid these issues?

Ivan Harmon stepped up and said he would discontinue the focus on the South Knoxville River Front and he would cut the funding to non-profit organizations. Harmon continued and again acknowledged the homeless issue by saying he wanted to help more of the citizens to get involved.

Rogero stated that she didn't see any fraud, abuse or waste nor did she see any area of the government that should be handed over to the private sector. She then mentioned Bill Haslam's tight budget that had already forced out unnecessary spending.

Although I disagree with Rogero I loved how she closed her statement by saying that if anyone does or ever did see anything or wants to suggest anything, she would remain open and eager to hear their concerns.

Mark Padgett has long been an advocate of government transparency (making the government and officials more accessible to the community) and stood up and spoke of making every single department available and open to the public so the public knows everything that's happening in their city.

Hulquist reinforced that it was an interesting question and said he would continually evaluate all local government departments while Bo Bennett said that, right now, he wasn't comfortable pointing to any government corruption but that he would audit each department and if he found an outside company to do things as good or better he would turn the department over to the private sector.

On the question of Knoxville's looming pension issue, Hultquist stood up first and stated that he would not raise taxes to address the issue. At that the other candidates echoed the sentiment, reinforcing that they, too, would not raise local taxes and that the problem is being dealt with and will continue to be addressed.

In their closing statements Rogero pointed out her 30 years of experience working in local government and with the community. She then stated that the mayor's position should not be a "start up job" but a job for someone who knows the city and has the experience. She ended by saying she looks forward to working with all of us.

Mark Padgett closed by saying how far Knoxville has come and pointed to our safer neighborhoods, the downtown growth and business. Then he wrapped it up by saying that Knoxville deserves a mayor who has the passion and energy to continue that growth. In a brilliant ending he said that this wasn't about him or the candidates but about us – all of us.

Joe Hultquist closed by saying that you need passion to care. Hultquist proudly says that Knoxville can be the greatest city in the USA and said that the south waterfront area was our best opportunity to continue Knoxville's success.

Ivan Harmon stood up and stated with a smile that no candidate has more experience than he. He spoke of his family and stated that he wanted to make Knoxville the greatest city for them. At that he asked for our vote.

Bo Bennett closed by pointing to his unique perspective. He reminded us that he is a working-class member of the community and that he sees everything from the bottom up not from the top down.

I like all the candidates, and I won't determine who I'm voting for until I get some more of my own questions answered. But tonight, all said and done, it was Ivan Harmon who shined the brightest.