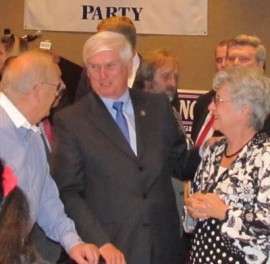 John Duncan Stands Up For US Veterans and Their Families

John Duncan (TN State Rep) has succeeded in changing federal rules preventing the placement of American flags on the grave-sites of U.S. Veterans.

Until recently, on the books was a veteran-site regulation preventing people from placing flags at U.S. Veteran gravesides. This "would-be common practice" was only allowed one day of the year: Memorial Day. The other 364 days of the year the flags were removed or the good-hearted friend or family member was stopped.

While innocently honoring their hero in a way they deemed appropriate, many people learned "the hard way" and became appalled. It was a rude awakening when they learned it was against regulations and the people were left on their own to deal with the illogic and confusion.

Duncan says, "Veterans, their families, and Cub Scouts are just some of the many volunteers who put small American flags on gravesites at Veterans cemeteries every year. This is a sacred act honoring our Veterans, and it should not be limited to just Memorial Day."

Duncan took the lead in this issue and gained a lot of support. On Friday February 18, 2011 he announced, "I am pleased that federal officials have made these appropriate, common-sense changes so volunteers can continue to honor our Veterans with the symbol of the Country they served."