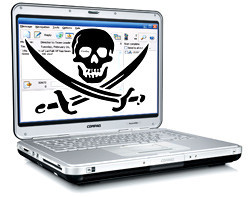 To familiarize you with one part/version of "online piracy," I set the following example. Before you read it please take into account that this is just one form of piracy and it does not mean you should hand-over complete Internet control to the US Government.

Imagine that your son or daughter is a star high school athlete, obtains a college athletic scholarship, and people begin talking about their chances to make the professional ranks.

Someone along the line educates you about online piracy and, in the best interest of your child, you go to a domain-provider to buy your child’s name and someone else owns it.

Web domains are bought and sold everyday and your first reaction is apt to be “no big deal.” The person paid around 10 dollars for the domain, they’re not doing anything with it and they’ll sell it for 50 bucks…. Right?

Wrong. The person who bought your child’s name knows all about their gift, they know that people are searching for more information about them and they know that the more famous your child gets, the more money they will make. If they do make a pro-team or become an Olympic star, that 10-dollar domain is now worth millions.

Chances are - the person who owns the site will entertain offers but it’s not going to be cheap and, the more determined you, or your child’s management, are/is about obtaining it, the more expensive it’s going to be. It is not unusual for famous athletes, musicians, actors and businesses to pay millions for a web domain.

Yes – this should be stopped but not at the price of complete US government control over the Internet. The problem with many of our laws, in and outside of the Internet, is that they are often abused and used to destroy common, everyday American rights. Before you are quick to support any law – read it. Find out exactly what you are agreeing to and don’t be afraid to question the details and how it will effect you and your family in the future.

Your creative rights, your right to compete in the business world and your right to free speech are at risk. If we don’t protect our own rights and simply hand over complete control we will find ourselves, our creativity and our businesses limited by strangers. 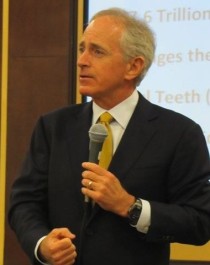 The “Stop Online Piracy Act” (SOPA), which House Representatives introduced in October,draws a lot of support from major companies, organizations and politicians, but not everyone is happy about the changes.

Reddit (a very influential link-sharing, social news website) is completely opposed to the bill and has launched a full-scale campaign against a few of the supporting companies (namely - Netflix and Go-Daddy) and one key political figure – Bob Corker.

The result of the campaign against Go Daddy (webhost and internet domain provider) speaks for itself. December 29th was dubbed “Dump Go-Daddy Day” but many customers began withdrawing and transferring their Go Daddy accounts as soon as they got wind of the campaign. So many, in-fact, that the pressure and lost revenue caused Go Daddy to rethink and change their original position.

How big is Go Daddy’s presence in DC? Probably a whole lot bigger than you think… Go Daddy has a full time role in government policy development that impacts the Internet. While SOPA was being finalized they were instrumental in recommending changes and fine-tuning the bill.

Go Daddy has now publicly stated that they are opposed to SOPA and say the bill is too polarizing. On Thursday, 12/29/11, Warren Adelman said Go Daddy observed a "spike in domain name transfers yesterday,” which the company attributed to Go Daddy's prior support for SOPA. “Our company regrets the loss of any of our customers, who remain our highest priority, and we hope to repair those relationships and win back their business over time."

Many people fear that SOPA, and other recent internet-related bills, opens the door for unnecessary lawsuits, unfair online censorship and government control. To make it all more complicated and controversial, many people are suggesting that the very companies supporting SOPA played a vital role in creating and distributing the software used to download copyrighted material.

Reddit has now targeted TN Senator - Bob Corker (one of the 39 senators sponsoring the bill) in what they call “Operation Corkscrew.” The fact that Corker is about to run for reelection makes him a vulnerable, prime target.

Most of the supporting politicians and companies, as well as those opposed, have no idea what this is about and no idea how the Internet works nor how much money is involved. Many just jump on the bandwagon as soon as they hear the words copyright, infringement and/or piracy.

All of that aside – What’s the true agenda of the people completely opposed to the bill? How much are they making? Have they even read the bill? Are they in the business of making art or stealing it? And, if they understand the internet, what is the true agenda those supporting the bill?

SOPA can be found here﻿