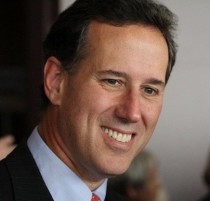 ﻿"There are no classes in America. We’re a country that doesn’t allow for titles. We don’t put people in classes. If elected president, I will not divide and separate the American people."  -------Rick Santorum﻿

Yesterday held two GOP Caucuses and one primary. I don’t think anyone expected or predicted a “Rick Santorum sweep” but that’s exactly what happened.

Although no delegates were at-stake, the wins are huge and have managed to swing the country’s attention from the Romney Campaign to the Santorum Campaign. The wins will also bring more financial support to Santorum, which, at this point, is greatly needed as he’s carrying about 2.2 million to Romney’s 57 million. Naturally the financial support will gain him more exposure, which will eventually level the playing field and lead to winning more elections.

If you keep score by states - Santorum, who has won 4 states, is ahead of Romney who has won 3.

*Minnesota is an interesting study where Romney would have his worst showing to date, with a third place finish behind Santorum and Ron Paul.

*Colorado was the state that most people were watching carefully. The live results came in slowly and both Santorum and Romney would lead at different points. In the end, as you can see, Santorum won by a 5% margin.

Colorado was also very close between Ron Paul and Newt Gingrich for 3rd place and, in the end, 1% separated the two.

Missouri was a “run away” and was never close. Santorum won every single county by a large amount and won the state by a whooping 30% margin.