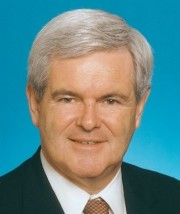 Gingrich Fires Back At ABC and Ex-Wife Allegations

Right after Perry bailed and Gingrich picked up the Perry endorsement, ABC ran a story about Gingrich’s past marriage and an interview with Gingrich’s ex-wife, Marianne.

While writing the endorsement story I heard part of the interview, all the bitterness in her voice and couldn’t help but laugh…. Not just at her, but also at ABC and anyone taking any part in staging, or paying-for, that event.

Did anyone really care what this woman had to say? Just what the country needs: more tabloid nonsense keeping Americans off the important issues.

Before ABC’s little story, the Gingrich camp was picking up a lot of support. He not only won the SC Debate, he received a standing ovation and, not long after that, he picked up the Perry endorsement and the attention of the country. At long last, the relentless smear campaign that Romney ran against Gingrich in Iowa was in the past and we could finally move forward and back to issues like Medicaid, social security, the national debt and unemployment.

Not quite…… instead we’re talking about Gingrich supposedly asking for an open relationship with his divorced 2nd wife of 18 years.

The sad part is: The country is being hurt. The tragic part is: The Gingrich children, who went through all the trauma of their parent’s divorce, have to listen to this crap played out in the nation’s top media outlets.

You can call it a “moral issue” and say it’s something our country should know about but, if you ask me, it’s immoral to release your personal marriage issues two days before an election in an attempt to destroy your ex-husband’s chances. It’s immoral for ABC to make this story a priority while the country is in dire circumstances. It’s immoral to put your children through a smear campaign.

If you believe that the timing of this story is coincidence – you’re very naïve. Why wasn’t it top news in 1999, when they were going through the divorce? I have my own suspicions on exactly who is behind it, but I’ll save it because there’s not yet proof…. But I can promise you that I’m looking for the financial trail and, if I find it, the person will be exposed.

Gingrich denied the story and, in last night’s debate, had some unpleasant words for ABC. "Every personal friend I have who knew us in that period says the story was false. We offered several of them to ABC to prove it was false. They weren't interested because they would like to attack any Republican," he stated.

Today, (Friday 1/20/12) ABC Vice President, Jeffrey W. Schneider denied the Gingrich claim and stated that, for days, they aggressively searched to interview anyone in the Gingrich camp.