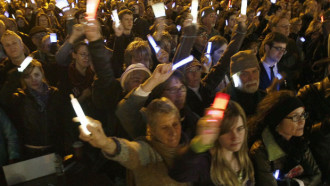 Yesterday (Sunday January 8, 2011), at 10:11AM, church bells rang throughout the city of Tucson, Arizona. The city, the state, the country and much of the world paused to remember what still can’t be explained.

Sunday was the one-year memorial of the bizarre rampage shooting that left 6 dead and thirteen wounded. Among the survivors was Democratic Congresswoman – Gabrielle Giffords.

With a big, proud smile, Giffords stepped on stage and the crowd broke out in loud cheers and applause while chanting, “Gabby, Gabby, Gabby.” She then led the crowd in a recitation of the Pledge of Allegiance.

Relatives of the victims walked down the aisle and placed roses in a vase of a beautiful memorial. The event was led by Giffords' staffer and shooting survivor Ron Barber and included a candle light ceremony. There were 19 candles, each one representing a victim or survivor.

Before the event President Obama called Giffords and said that her recovery was remarkable. He also stated that he, his wife and the nation keep Giffords in their daily thoughts and prayers.